French firm SCAU designed the undulating fibreglass roof of Marseille's football stadium, which is set to host the UEFA Euro 2016 semi-final between France and Germany this Thursday (+ slideshow).

SCAU was asked to refurbish the existing Stade Vélodrome in preparation for the European football championship, extending its stand capacity from 60,000 to 67,000 and developing a new roof to shelter spectators.

The roof rises to follow the height of the extended stands and descends down over the sides of the stadium's black and white striped facade to create a 25-metre-deep wind break.

"It figured at the forefront of the brief in order to protect the stands from bad weather and the Mistral, it has become the new emblem of the Stade Vélodrome, and its raw material," said SCAU. 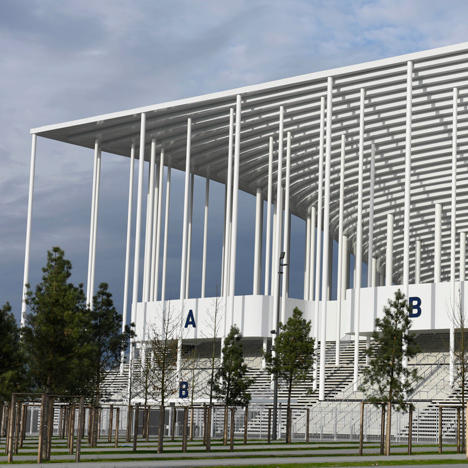 "[The] large, white, translucent undulating roof spreads out to land above the stands and swathe them, like a vast shell come out of the sea."

The roof is made from teflon-impregnated fibreglass canvas designed to require minimal maintenance.

The material is stretched over a metal framework to give the roof its undulating silhouette and create a scalloped texture across its surface.

The translucent material is illuminated from inside at night to turn the building into a beacon for the area. The stadium also features an open-air pitch thanks to a well in the centre of the roof.

"This highly technological and extremely hardwearing milky skin provides great resistance to rain and wind,"  said the architects. "It allows natural light to penetrate, while protecting from the sun.

"It also allows sound to be retained in the interior of the stadium in order to give events – matches or concerts – their maximum intensity."

SCAU also created a new stage, reception area and dressing rooms to allow the stadium to host concerts and events, as well as sporting events.

These news spaces are tucked beneath the stands and have direct views over the pitch, while changing facilities and parking zones for sports players are slotted below the new raised entrance area.

In addition to the main stadium, the Parisian studio was also asked to restructure the adjacent Stade Delort rugby stadium and to create a 100,000-square-metre complex containing accommodation, a shopping centre, gym and hotel.

The stadium was originally designed in the 1930s by French architect Henri Ploquin as an all-round sporting venue with a cycling track, leading to its name Stade Vélodrome – a combination of stadium and velodrome.

Earlier this month we collected together everything you need to know about the six key venues for the UEFA Euro 2016.

Among them is Populous' sound-amplifying stadium in Lyon and Herzog & de Meuron's Stade de Bordeaux, which features a rectangular roof supported by hundreds of slim white columns.