Panes of transparent and translucent glass create a gridded facade for this photography museum in Albania by Dutch studio Casanova + Hernandez Architects (+ slideshow).

Rotterdam-based Casanova + Hernandez restored and extended an old government-owned building in the city of Shkodër to create the Marubi National Photomuseum.

Behind the historic facade of the old building, the architects added a two-storey extension with a gridded glass facade.

White aluminium frames support a series of transparent and translucent glass, backed with gypsum board, to create a gridded pattern that is based on camera apertures.

"The modern image of the museum is based on an abstract pattern, which is inspired by the geometry of the aperture of the photographic camera that opens and closes to control the light," explained Casanova+Hernandez Architects. 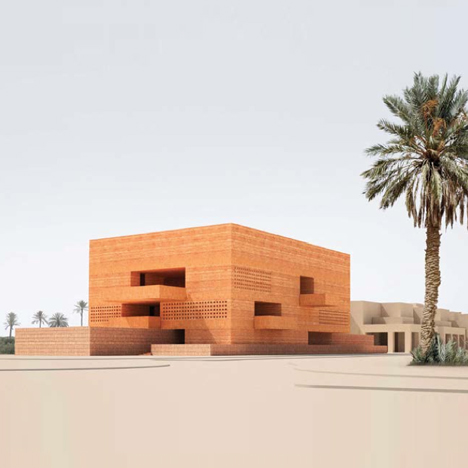 "The different qualities of reflections of the translucent glass depend on the season and the moment of the day."

The abstract design of the facade is echoed in the pattern of pigeon-hole shelving and cabinetry inside the galleries, as well as five exhibition boxes.

These exhibition boxes are used to display the work of three generations of Balkan photographers from the Marubi family, after which the museum is named.

The panels act as frames for photographs, documents and equipment from the archives of Kel, Pietro and Gegë Marubi.

The family's timeline is displayed on the outer walls of the boxes, while a studio, darkroom and archive space are recreated within to show the phases of the photographic process.

"Preserving and disseminating Marubi's work in a historical city such as Shkodër acquires a strong symbolic significance that will help to promote the Albanian national identity, specially among new generations," said the architects.

To create a cohesive visual identity for the museum, the studio carried elements of the new design through the existing building. Designed by local architect Kolë Idromeno, this renovated structure provides additional gallery space.

Leaving original windows and layout of the building intact, the architects created a multifunctional entrance hall centred around a reception area with gridded shelving.

This pattern also becomes the logo for the museum and is used to cover an information and display box stationed outside its entrance.

"Marubi National Photomuseum acquires its own specific identity by linking all spatial, structural, functional, graphic and visual aspects, helping visitors to identify building and collection with a complete, rich and unique experience," said the architects.

"Tradition and modernity establish a dialogue in every corner of the building," they continued.

"The project intends to create an open and alive museum capable of becoming a cultural landmark linked to the street life of Shkodër."

Other contemporary designs for photography galleries include O'Donnell + Tuomey's extension to a red brick warehouse for The Photographers' Gallery in London, and David Chipperfield's plans to create the world's largest free-standing photography museum in Morocco.

Photography is by Christian Richters, Blerta Kambo and Casanova+Hernandez Architects.