Shanghai studio XL-Muse has used black mirrored flooring and arched shelves to create a tunnel of books inside a Chinese store (+ slideshow).

The shelving reaches to the ceiling in the corridor of the Yangzhou Zhongshuge bookshop and is reflected by the floor below, which is designed to emulate the effect of water.

The designers took inspiration from the store's waterside location in Zhen Yuan, as well as the area's arched bridges.

"In the past, guided by water, many literati and poets visited and gathered here," said XL-Muse. "[The bridges] used to be the guiding factor of culture and commerce, and they represent that the bookstore is the bond between humans and books at the same time." 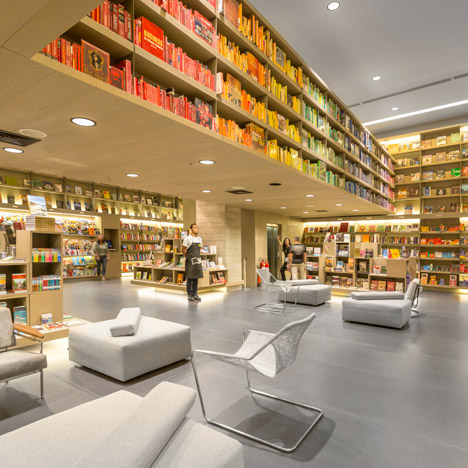 The Yangzhou store is the latest interior XL-Muse has created for book retailer Zhongshuge. The studio previously created an oval reading room with stepped shelving for a branch in Hangzhou.

Rather than meeting at the top, Yangzhou Zhongshuge's concave shelving is separated by a lightning bolt-shaped gap across the middle of the ceiling.

Reflected on the mirrored flooring, this gap is meant to act as a river, leading customers forward into the store.

The lobby is the most dramatic part of the 1,000-square-metre space, which also includes a reading room and a village-themed kids' area.

The main reading room also features curvaceous shapes in the form of sculptural, white pillars that curve inwards from the ceiling.

Shelving here is a combination of traditional vertical styles and black metal stands arranged on a gentle slope that complements the curves of the pillars.

The wooden shelving is painted in a spectrum of bright colours, and the ceiling lights are arranged to suggest a starry sky.

Floor-to-ceiling books can also be found in São Paulo's Cultura Bookstore, which won the retail category at the Inside Festival in 2014, and in London's Libreria, where handmade wooden bookshelves are based on the fictional Library of Babel.