Brick piers frame the double-height windows of these three houses that husband-and-wife team Robert and Jessica Barker have slotted behind a row of Victorian terraces in southeast London (+ slideshow).

British architects Robert and Jessica Barker, designed one of the homes as a live-work space for themselves and the other two to part-fund the project.

The development, which they named Forest Mews, is screened behind Victorian housing in Forest Hill and made visible only by its gravelled driveway. 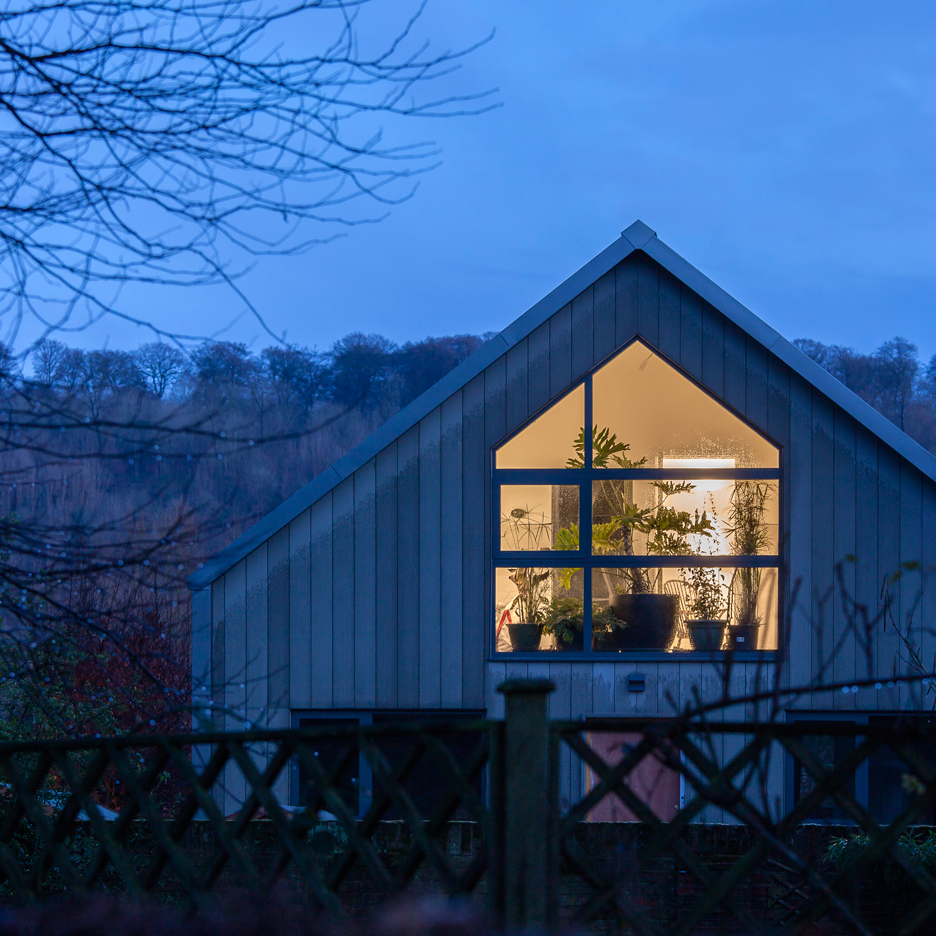 The drive opens into a triangular courtyard, which previously contained a house occupied by the Barkers, a disused store and a textile-printing workshop.

The architects wanted to retain the "sense of a woodland clearing" on entering the mews, so positioned the three new blocks around its edge.

On the ground floor of each residence they created semi-private living and work spaces, which open onto the courtyard.

"The ambition was to create an inspiring place to live and work," said the architects, explaining how they often found themselves working around the dining table, so wanted to create a dedicated space within their new home.

"The plans evolved to overcome this overlap of activities by separating the functions, providing dedicated spaces, whilst maintaining a visual link," they added.

The architects also gave each residence its own private patio to maximise light on the land-locked site and to separate the living and working spaces within.

Tall brick piers run across the front of these patios to mark the boundary between private and shared space and to continue the pattern of the facades.

The shared courtyard is landscaped with a geometric pattern of resin-bound gravel and planting that echoes this pattern.

Climbing planting will be trained up the brickwork and along the mesh trellising that angles across the double-height windows.

Over time the pattern from the courtyard, which is based on the design of the couple's wedding rings, will grow over the faces of the buildings.

"The hard surfaces will be slowly tempered and softened as the climbers establish over the treillage covering the bricks," said the architects, adding that they planted the roofs with wild flowers and sedum to minimise the visual impact on overlooking neighbours.

Earthy-toned flooring is used throughout the interior of each block to create a sense of continuity between communal and more private space. The flooring transitions to a dark to light resin at the foot of the stairs to denote the transition to bedrooms and bathrooms above.

This commercial flooring was chosen to reduce costs and, alongside blackened steel balustrades and railings, gives the spaces a utilitarian appearance.

Each of the three-bedroom houses share similarly patterned facades, created by strips of brickwork and double-height glazing, and have accents of bright colours on its bathrooms and utility rooms. But each also has custom elements.

House 1 – the architects' own home – is the largest of the three properties, and features a partial glass floor and a glossy red bath.

House 2 is the smallest of the blocks, but it still features three bedrooms arranged around a double-height atrium on its upper floor. The roof of its ground floor lounge has been chamfered so as not to block sunlight for a neighbouring garden.

House 3 has the most private of the courtyards, which is placed on the west to ensure sunlight.

"Each house is tailored to its position on the site, fashioned from the same building fabric, and gathered together using a common design thread," said Jessica and Robert Barker. "The sections were almost entirely informed by studying the daylight to its context and interiors."

"The project is finely balanced – there are common design features for economies of scale and procurement, and yet each house has it's own individuality and character," they added.

"Atypical to a traditional mews, the designs are light and airy, with a high proportion of glazing to solid, carefully designed in combination with internal planning, to provide privacy in places and openness in others, to encourage a sense of community."

Robert Barker has previously designed flood-resilient architecture with Baca Architects, including a range of floating housing including the UK's "first amphibious house" and a floating house concept to solve London's housing crisis.