Architecture studio Dallas Pierce Quintero has completed a cluster of houses in London with sawtooth roofs and corrugated-metal cladding that nod to the site's former use as a builders' yard.

The project, named Forest Houses, is located beside Wanstead Flats parkland in Newham and is conceived as a prototype for reimagining unloved brownfield and infill sites.

It comprises a three-bedroom home, a pair of two-bedroom houses and a one-bedroom residence in a converted shop, all oriented to overlook the nearby park.

Dallas Pierce Quintero adopted an "upside-down" layout for the homes, with ground-floor bedrooms and first-floor living spaces that give access to natural light and views.

"The interlocking buildings have helped reimagine this unloved pocket of space – of which there are many in cities like London – in a way that is space efficient, without compromising on existing amenity space or daylight to neighbouring properties," co-founder Jonathan Dallas told Dezeen.

The Forest Houses' bedrooms sit within raised brick plinths that reference the surrounding Victorian terraces and interlock with a series of courtyards enclosed by perforated brickwork.

Above, the living, dining and kitchen areas are housed in a series of prefabricated cross-laminated timber (CLT) "pods", clad externally in corrugated metal informed by the site's former industrial use.

"In developing our design, we were keen to ensure that the first-floor pods drew inspiration from industrial structures not just in their appearance, but in the efficiency of their construction," said Dallas.

"Offering a fast yet high-quality solution, the pods were manufactured in panels and then assembled on-site, in less than five days, providing a feasible prototype for brownfield development, which can deliver dense, adaptable urban living," he added.

The Forest Houses' interior finishes mirror the external contrast, with exposed blockwork used in the ground-floor bedrooms and exposed CLT in the first-floor pods.

First-floor areas are organised with a kitchen to the rear and living space at the front, benefitting from the additional height of the sawtooth roof and a clerestory window. 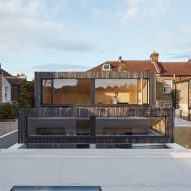 The plinth has been topped with a grass roof, blending into the surrounding views while also providing a private outdoor space for the units.

While the smaller openings on the first floor are frosted for privacy, each of the Forest Houses is oriented to allow for a fully-glazed wall at one end overlooking the park.

Other projects in London that have recently adapted neglected infill sites include a home by Studioshaw, which also used a sawtooth roof form to draw light onto a former garage site.

Parti created a compact housing project within a terrace of Victorian buildings with a palette of robust and affordable materials.

The photography is by French + Tye.