The lamps in the Crane series each feature a bronze body – fashioned as the crane – that hoists up a glowing borosilicate glass rod with a leather strap.

The larger-scale Vault lamps have a concrete base and a thin, curving line of brass, punctuated with LED tubes, wooden elements and ceramic pendants.

"The widely varying scale of the pieces prompts a different interaction with the viewer," said the gallery. "Some pieces are human scale and are easily perceived as objects, while others become architectural, creating space for one to walk through." 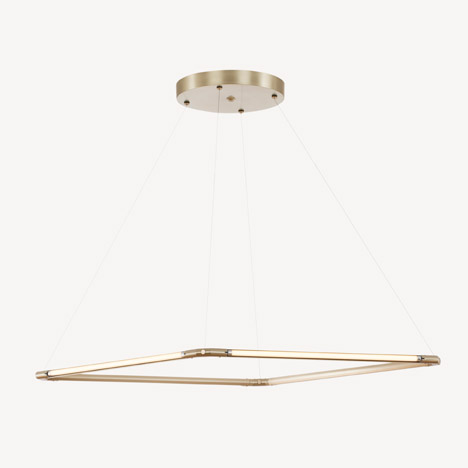 Brittain came to lighting via what she describes as a "windy route". She started out on a product design course at Parsons School of Design but found it didn't suit her.

Instead she studied philosophy at New York University and then architecture at the Architectural Association in London before heading back home to work at architecture studio WorkAC.

After a year or so she switched direction again, ending up as a design director for New York's premier lighting designer Lindsey Adelman.

"With architecture, you have to let go of a layer of detail at some point because you have subcontractors," she said, explaining the career switch. "I like the fact that I can be more obsessive with detail on this scale."

"It's more pragmatic," she adds. "If you were that obsessive with architecture, you would never get anything built."