London studio De Matos Ryan has refurbished a historic theatre in York, England, to create more space in both the 18th-century building and its 1960s extension by Modernist architect Patrick Gwynne (+ slideshow).

De Matos Ryan oversaw the latest modernisation of the heritage-listed York Theatre Royal, which first opened in 1744 on the site of a former medieval hospital, but has undergone several renovations since then.

A Victorian Gothic frontage was added to the building in 1880, while the concrete and glass extension by the late architect Patrick Gwynne was built in 1967.

"The redevelopment of the Grade II-listed building unlocks the full potential of a complex site that had developed incrementally over 270 years," explained architect Angus Morrogh-Ryan, who leads De Matos Ryan with co-director Jose Esteves De Matos.

"It has created additional space the theatre urgently needed in order to appeal to and engage a wider community, bring more people into the building and create the opportunity to increase revenue, enabling it to be more financially resilient in the future," he added.

From the street, the most noticeable change is the enclosure of the Victorian colonnade to create a glazed foyer. 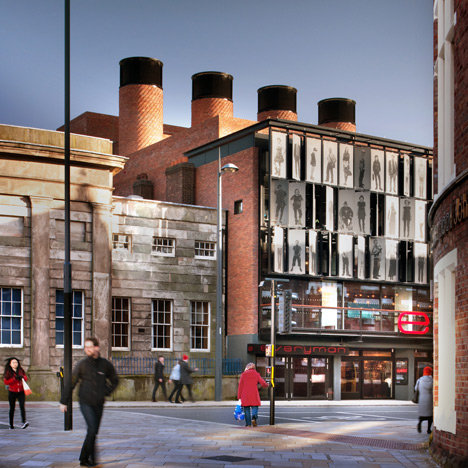 This space contains cafe seating and creates a more engaging street presence, described by the architects as being "akin to a storefront".

The foyer also incorporates new entrances and doubles the size of the public areas, as well as improving the connection between the Patrick Gwynne extension and facilities including a Georgian staircase and an events space at the opposite end.

An illuminated Corian counter extends along the rear of the foyer area, incorporating a box office and cafe counter.

The terrazzo flooring in this space features a patterned inlay that marks where medieval vaults once stood.

Efforts were also made to reestablish the original design intent of the extension, which was planned to house a bistro restaurant on the ground floor and a theatre bar on the first floor.

The refurbishment focused on decluttering the space in order to accentuate the extension's character and details, which include hexagonal concrete columns that splay outwards at the top in reference to the building's Gothic vaulting.

The floor coverings and furniture were updated, while new lighting was added on a track system that conceals fire detection, AV and cabling. This provides a clean and efficient solution that helps to highlight the unusual shapes of the vaults.

Circular roof lights were installed above a curving staircase ascending from the extension to the first-floor bar, as well as over a foyer on the upper storey, to allow natural light to filter into the circulation space.

The openings were part of the original roof but had been compromised during subsequent renovations.

In the first-floor theatre bar, a backlit Corian counter was installed based on drawings showing that Gwynne's initial design included a freestanding servery.

The main auditorium was upgraded with new seating. Increasing the rake of the stalls and the gallery made it possible to improve sightlines, increase ticket yield and facilitate a greater range of price options.

"The redevelopment of York Theatre Royal has brought a sense of cohesion to the overall site,"said Morrogh-Ryan.

"The works make good on the previous limitations imposed by its historic but incremental development."

"We have been able to clear out the clutter that had accumulated over the past decades, make new connections and open up new spaces, which allow all of the periods to breathe more easily in their own right," he added.

De Matos Ryan is a London-based studio. Past projects include an underground house located beneath a stone tower and a London home that sits within a sunken courtyard.

Photography is by Hufton and Crow.