Italian design collective Nucleo has tweaked its popular design for a grass armchair that grows over time, relaunching it with a crowdfunding campaign (+ slideshow).

Launched on Kickstarter this week, Terra 2.0 consists of a cardboard frame that becomes a chair when it is filled with earth and grass grows over it.

The kit comes as a set of flat, numbered pieces of perforated cardboard. The frames are separated by cutting along the perforations and then assembled by slotting them together in a specified sequence to create the frame of the chair.

A mixture of non-compactable material and soil is then poured into the frame, before grass seeds are scattered onto the surface. It takes about two months for the grass to become fully established, creating a green armchair with a relaxed shape.

"There is no greater form of intimacy with an object than to be its creator," said Nucleo. "Terra is not a finished product, it is an idea; we provide the cardboard frame, the main ingredient, the dirt can be found everywhere on our planet. The armchair will be born in your garden and becomes part of your landscape." 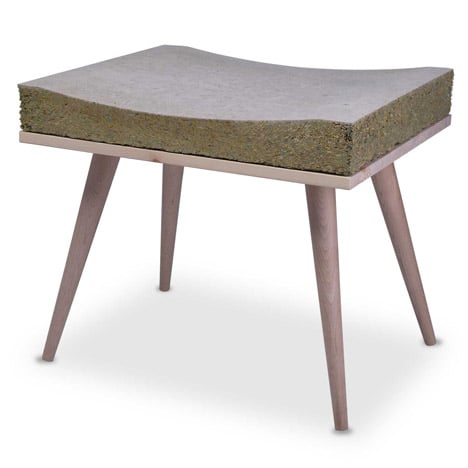 Henry&Co's Chayr features a seat made from hay and grass

The original version of the Terra chair was first presented during Milan design week in 2000 and went of to feature in a number of exhibitions. It proved popular enough for the studio to start selling the design itself, but the cost of production meant that it had to cease manufacturing in 2005.

New, cheaper production technologies and a letter requesting two of the chair frames prompted the studio to revive the product this year and launch it on Kickstarter.

Nucleo founder Piergiorgio Robino and designer Andrea Sanna tweaked the design to make it cheaper to ship and easier for the purchaser to assemble, as well as using laser-cutting to reduce production costs.

"In the new version, we wanted to completely revise and adapt to the technologies in use today," they said.

"Terra 2.0 is slightly smaller than the previous to better respond to transport needs and it's fully realized by laser cutting (panels and graphics). We reviewed the assembly to make it even simpler as well as the creation by the end user."

Turin-based Nucleo is a collective of artists and designers led by Piergiorgio Robino.

The studio has also been experimenting with resin in furniture design, presenting a stool coloured to simulate a semiprecious stone for Gallery Amman last year.