The president of the United Nations General Assembly's office has received a makeover with furniture by Danish designers Arne Jacobsen and Poul Kjærholm (+ slideshow).

The Republic of Fritz Hansen has donated several pieces to the space currently occupied by Mogens Lykketoft, who comes from Denmark.

Lykketoft heads the General Assembly, which comprises all 193 members of the United Nations (UN) and provides a forum to discuss a spectrum of international issues.

The Danish brand's gift includes four Swan chairs by Modernist designer and architect Arne Jacobsen. Designed in 1958 for his SAS Hotel in Copenhagen, the chairs have organically shaped arms and backs upholstered in leather.

A high-backed version of Jacobsen's Oxford chair – first created for St Catherine's College at Oxford University in the UK – sits behind the president's desk, while a curved plywood Series 7 chair with metal legs and armrests can be used by visiting dignitaries.

Pieces by fellow Modernist Poul Kjaerholm also feature in the office. They include his modular PK31 sofa and armchair, the wood-topped PK51 desk and glass PK61 coffee tables.

The office is located in the UN headquarters in New York, designed by Brazilian architect Oscar Niemeyer and completed in 1952.

Coincidently, the new furniture comes from the same time period that the building was designed. 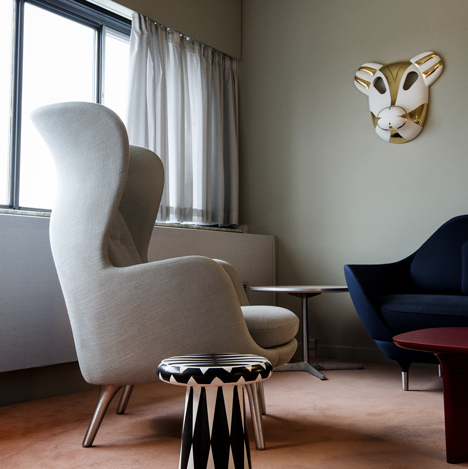 It sits in the low-rise conference building, between the Trusteeship Council Chamber designed by another Dane, Finn Juhl, and the Economic and Social Council Chamber by Swedish architect Svem Markelius.

It has access to a balcony that runs the length of the building, which overlooks the East River and Long Island City on the opposite bank.

However curtains are often closed across the floor-to-ceiling windows due to security concerns.

"It's an office where, during 10 days of the General Assembly last year, 90 heads of state and foreign ministers from across the world came to this office," said Lykketoft, who has hosted guests including Barack Obama, the pope and Oprah Winfrey over the past year.

The intention is for the new furniture to lighten up the space, which previously featured dark pieces typical of Middle America.

"I really dreamed about changing the dark, heavy, ordinary UN furniture here with something as delicious as this," said Lykketoft.

Another factor when choosing the furniture was making sure it looked good against the protected wood panelling around the office, which was a gift from Australia.

Lykketoft only has a couple of weeks left to enjoy his new office – Peter Thomson from Fiji takes over the year-long presidency later this month.

"To have a really beautiful Danish imprint on this office for the future," said Lykketoft, "it will give a glimpse of the best of Danish furniture design for anyone coming inside the president's office in the future."