Architecture studio IFUB has transformed the second floor of an old chocolate factory in Berlin into an apartment featuring curved ceilings, exposed steelwork and big windows.

IFUB renovated Apartment H to provide a shared home for the client's daughter and her friends. The aim was to create a comfortable living space without losing traces of the building's industrial heritage.

The original clay tile floor is uncovered, cleaned and oiled, while vaulted ceilings and steelwork are left exposed but painted white to reveal the texture of the brickwork.

"The ceilings are all original – in Germany this type of construction is called a Prussian vaulted ceiling," architect Bernhard Kurz told Dezeen.

"It is a load-bearing steel structure with vaulted bricks in between the beams," he added. "In this building it is beautifully done."

Located in the city's Neukölln district, the old structure was first built in 1870. It was used for producing chocolate for over 50 years, from 1926 to 1973, before being converted into shared flats against the will of local planning authorities.

But these tenants avoided eviction, and the building started to earn a reputation as a venue for parties. It was not until the late 1990s that the owner eventually divided the building up and started selling off the different parts.

The German studio had already completed one renovation project in the building – the Sauspiel Offices, located on the raised ground floor.

For Apartment H, the team left the layout largely unchanged. Their biggest change was to replace the old bathroom with a much smaller toilet cubicle. They then created a more generous bathroom at the other end of the home.

This leaves a light and spacious kitchen and living room area. Walls and ceilings are painted white, matching the vaulted ceilings and steelwork, and are complemented by white kitchen units. 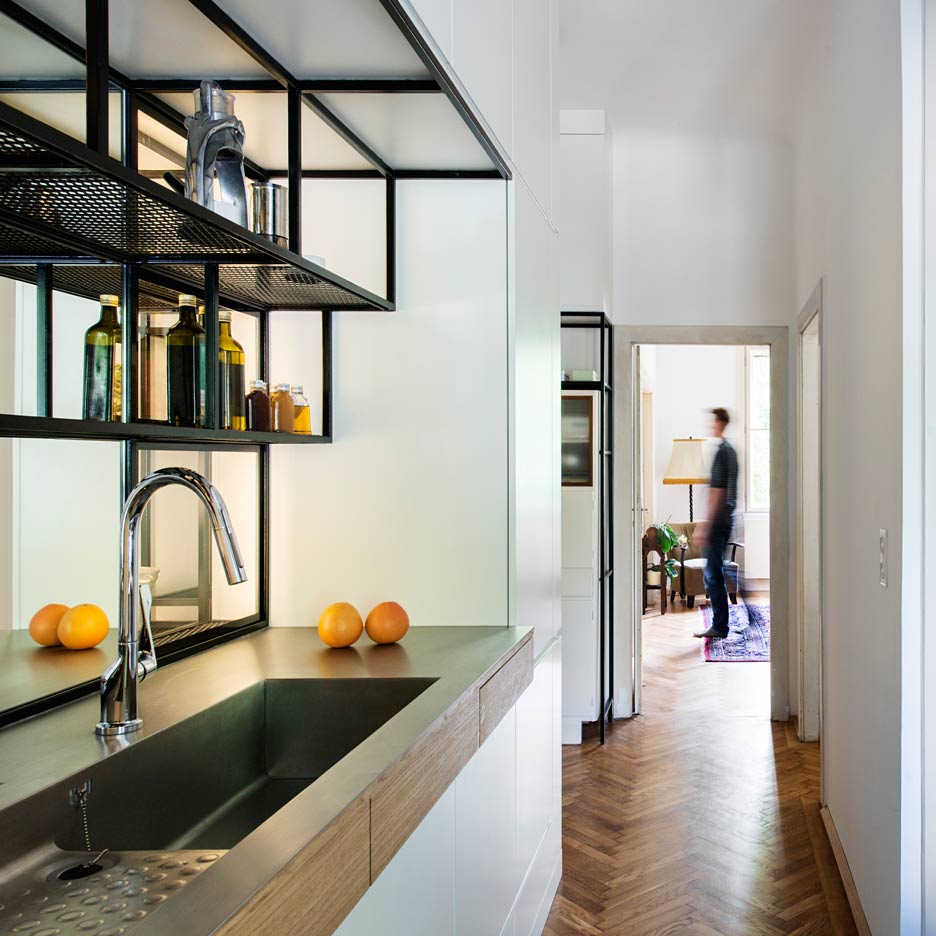 "The most important part of the project was to secure and uncover as many original materials and surfaces as possible," said Kurz. "We didn't change any part of the building's structure."

Large windows help to ensure plenty of light enters the space. There are also a pair of gymnastic rings hanging from the steel structure – a remnant of the previous tenants.

The three bedrooms were designed to be almost the same size. They are arranged around the new bathroom and boast built-in storage.

The bathroom is the only room where new surfaces were added. Moroccan lime plaster gives the walls a smooth finish.

Photography is by Julia Klug.