A pair of gabled buildings clad in corrugated aluminium make up this house in Linköping, Sweden, designed by architect Björn Förstberg for his mother (+ slideshow).

Björn Förstberg, co-founder of Malmö-based studio Förstberg Ling, was asked by his mother – a librarian and a weaver – for a small but airy home, with a studio space and a generous amount of bookshelves.

Entitled House for Mother, the residence is located on a long and thin plot. In response, Förstberg Ling split the house into two slender volumes that are offset from another.

The blocks are different heights and accommodate different functions. The one-storey volume contains an open-plan kitchen, dining room and living room, with a bathroom behind. The studio and bedrooms occupy the second volume, which has two levels.

"A starting point for the project was the overall theme of the area – narrow plots with a rich variation of houses," Förstberg told Dezeen ."The double-gable motif of the two parallel volumes came from the idea to emphasise this situation." 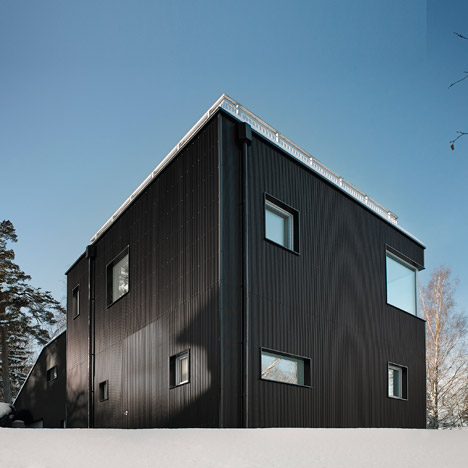 "The division of the house into two volumes, slightly shifted from each other, emphasises how narrow the plot is," he added.

The house is raised from the ground on a concrete plinth. It features an aluminium roof and facade, which give it a reflective finish.

"The raw aluminium on the facades and roof is maintenance-free, but maybe more importantly, it gives a soft reflection of the surroundings and changes expression according to seasons and time of day," said the architect.

Inside double-height, angled ceilings keeps the spaces light and open.

Wooden beams and trusses remain exposed throughout, and the walls are lined with plywood. These are mainly left unfinished, but are painted white in the lounge, hallway and guest bedroom.

"To make the inside of the house feel softer, all interior wall surfaces are clad with plywood, either painted white or treated with a neutral hard wax oil," said Förstberg.

"By not using plaster and gypsum boards, the white areas don't feel too clinical and develops patina with age."

Concrete flooring is used throughout the ground floor, folding upwards to create a low bench along the perimeter in some places. A light wooden flooring features in the bedroom on the mezzanine storey.

There is also a small greenhouse, that is accessed from the lounge, which features a wooden frame and polycarbonate glazing.

House for Mother is one of a number of beautiful Swedish residences on Dezeen. Other recent projects include a villa that fans out in all directions and a weekend retreat with views over the treetops.

Photography is by Markus Linderoth.