Atelier Peter Zumthor & Partner will create a major extension for the institution, which bills itself as Switzerland's most-visited art museum with over 6.2 million visitors since its launch in 1997.

The extension will be built on private land in the Iselin-Weber Park, which will be made accessible to the public. This echoes the strategy behind the main building, located in Berowerpark – the formerly private grounds of the 18th-century Villa Berower.

Piano's building sits on a long, narrow plot on the edge of the park. It was created initially to house the collection of arts patron and collector Ernst Beyeler, but its collection has expanded significantly over the past 20 years.

The new addition will create the first purpose-built spaces for the museum's education and events programme. The merging of the two parks will also create space for outdoor sculptures and events.

Funded entirely by private donations, the extension project is expected to cost £62.5 million (CHF 80 million). The design is due to be unveiled later this year.

"The sky above Basel, the city and its surroundings – those are the landscapes of my youth. It is heart-warming to be able to design a major building here," said Zumthor.

The 2009 Pritzker Prize winner has amassed a cult-like following among architects thanks to his monolitihic, minimal style, and his relative reclusiveness. 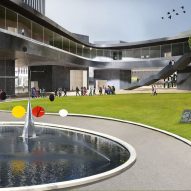 His best-known projects include the Therme Vals spa in Switzerland, the Kunsthaus Bregenz in Austria, and the Brother Klaus Field Chapel in Germany – a tiny concrete building in the middle of a field lined with charred tree trunks.

More recent projects include the 2011 Serpentine Pavilion conceived as a peaceful walled garden, and a series of dark-coloured buildings on stilts at a historic mine in Norway.

Zumthor is also currently working a major redesign of the Los Angeles County Museum of Art, which will be his biggest project outside of Europe. The controversial 37,000-square-metre building will feature curving dark-coloured forms based on nearby tar pits.