American firms Rogers Partners and Nelson Byrd Waltz have conceived a raised, tree-lined park for Atlanta, Georgia, that would be built atop rail tracks and a busy roadway (+ slideshow).

Called Buckhead Park Over GA400, the project calls for a strip of green space to be constructed over a freeway and commuter railway in Buckhead, a business and residential district in Atlanta. The park will stretch 2,400 feet (731 metres) and will offer a variety of activities.

The scheme was envisioned by New York-based Rogers Partners in collaboration with landscape architecture firm Nelson Byrd Woltz, which has offices in Charlottesville, Virginia, and New York City.

The park could serve as a model for other car-oriented cities, such as Dallas and Houston, the team added.

The park would help stitch together parts of the Buckhead neighbourhood that became disconnected when the highway was built there in the 1990s. The rail line occupies the highway's median.

"Slicing through the heart of the Buckhead neighbourhood in Atlanta, a busy highway and a commuter rail line have physically fragmented the community for many years," said Rogers Partners.

The new park aims to "make the area whole again, providing the public with safe, easy and efficient access to the many amenities in the district". 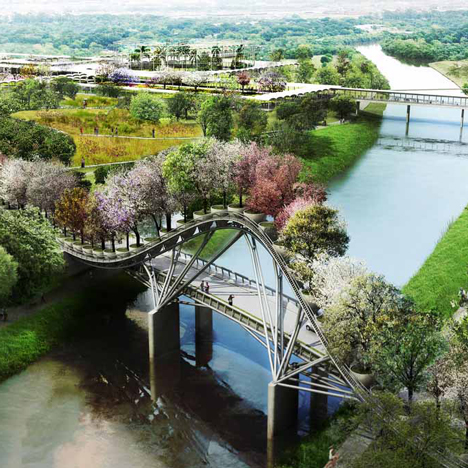 The north end is anchored by a commons area, with a small amphitheatre for both casual and formal events. The southern terminus will offer a garden setting, serving as a "green oasis for people to enjoy".

The midpoint of the park is defined by a plaza with space for retail, restaurants and transit access. Unifying all components is an allée of shade trees, which will run the full length of the park.

A pedestrian path will connect surrounding streets and will encourage residents "to use the park throughout the day as they walk to work, home, and the many cultural attractions of Buckhead". The team also envisions the park linking to Path 400, a bike and running trail that is currently being built in Buckhead.

In addition to serving as a vibrant public space, the park is intended to help reduce the heat-island effect in Atlanta, which is the capital of Georgia. About 6.2 million people live in the Atlanta metropolitan area.

The design calls for sustainable strategies such as irrigation systems that will use captured stormwater and native flora that will require minimal maintenance.

In October, city officials are expected to discuss the next phase of the project, which includes preliminary engineering and funding opportunities.

"We're very excited to move ahead on this pioneering project," said Jim Durrett, executive director of the Buckhead Community Improvement District. "When Buckhead Park Over GA400 is complete, Atlanta will have a unique, world-class civic space that is both beautiful and functional."

Other park projects in the US include a proposal to create an underground park, called the Lowline, in Manhattan and another proposal to build a West 8-designed botanical garden in Houston that would feature a bridge topped with an arch of trees.