Bubble-wrap partitions reveal the former layout of a derelict west London hotel as part of an installation by UK artist Michael Iveson (+ slideshow).

The site-specific Corridor meandered through the first floor of The Averard Hotel on Lancaster Gate, hinting at the empty building's previous life.

Built in the 19th century as a mansion house, the building was later turned into a hotel but has lain empty for several years and is awaiting renovation.

Internal walls that divided up its grand spaces into smaller bedrooms and bathrooms were removed after doors were closed to guests, but left traces of their presence on the walls and flooring.

Iveson, who took up a studio space in the abandoned building in January 2016, chose to allude to the past structures by recreating only the corridor used to connect the rooms.

"When I moved into the space I was interested in the architecture and how space is manipulated in buildings," the artist told Dezeen.

"For example here, in the upstairs rooms, they put in multiple rooms as a hotel so they had more space – those ideas of division of space."

He stretched sheets of bubble wrap covered with black ink across a wooden frame, and covered the assemblage with a low ceiling.

The tunnel-like structure snaked around the first floor and protruded into the large open spaces. 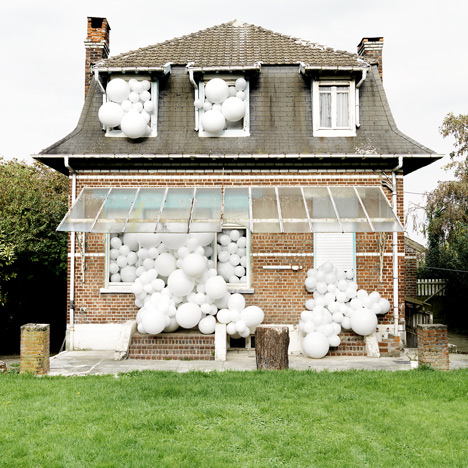 Where doors into the hotel rooms used to be, pastel-coloured paintings on the plastic material were created in their place.

"The installation is the footprint of the corridor that resulted in the dividing up of the rooms," said Iveson. "I wanted to create something that tied all those spaces together."

Natural light from the building's large windows was diffused through the painted bubble wrap.

"I was interested in the idea of it becoming almost performative, with the viewers moving around the space so you can see silhouettes and light coming through it," Iveson said.

In response to a section of staircase that breaks through the ceiling of the ballroom, the artist also created two sculptures shaped like the underside of steps and placed them in different parts of the hotel.

Along with the installation, Iveson exhibited a series of paintings across the hotel's ground-floor spaces.

The geometric artworks were created using pages of the Financial Times newspaper with the adverts cut out, leaving shapes that were combined to resemble abstract architectural floor plans.

Iveson's exhibition, curated by Alex Meurice of Slate Projects, ran from 9 to 18 September 2016.

Derelict buildings are a favourite of artists and designers for displaying work. Others that have been used as venues include a doomed Belgian school, an abandoned Philadelphia church and a former Chicago bank.