The Tektites collection explores ceramic foams through a range of homeware that is pocked with holes like Swiss cheese.

"Ceramic foams have been used in applications such as mirror mountings on space telescopes as well as the heat shielding that aided NASA's space shuttles to re-enter the Earth's atmosphere," said the studio, which was founded by designers Marina Dragomirova and Iain Howlett. 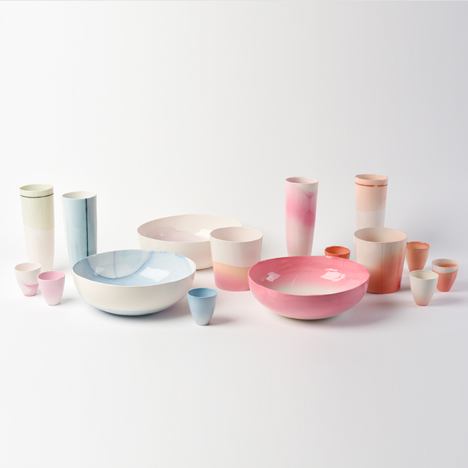 The pair decided to replicate the ceramic foam production process on a smaller scale, using a bisque porcelain named Parian.

They began by impregnating various kinds of porous foams with the porcelain to see how each behaved.

The pieces were then fired to 1200 degrees Celcius, causing the sponge to fizzle away and leave an identical ceramic form behind.

"The fragments resembled meteorites," said the designers. "To the touch these fragments felt warm, hard and stone-like, but bizarrely they felt near weightless also."

The Tektites collection is on show at the Particle Particular exhibition in Shoreditch until 25 September 2016, as part of this year's London Design Festival.

Also for the festival, architect Asif Khan installed plant-filled pavilions across Shoreditch, while Lee Broom transformed his store into a giant optical illusion.