Worland Gardens is a group of three-storey townhouses situated on a previously vacant lot owned by the London Borough of Newham.

The local council designated the site for shared-ownership properties – buildings that are part-owned by the council, part-owned by residents, making it easier for renters to get on the property ladder.

It asked London-based Peter Barber Architects to develop a proposal to maximise the amount of family-sized homes on the site.

Barber wanted to complete the existing street by filling in the entire available space using forms and materials that are sympathetic to the late-Victorian properties.

The new townhouses continue the line of the existing buildings but introduce another storey to make the most of the available space. The position of windows and terraces that break up the facade also reference the existing elevation.

"The scale is a little different, because we added a storey, but we also included notched inset terraces that refer to the height of the other buildings," said Barber, whose previous work in London includes a housing and shopping complex featuring turrets and cantilevered terraces, and the refurbishment of a housing scheme with a mixed material palette.

Entrances to each of the residences are contained within recessed arches, which provide intimate semi-public spaces where the owners can relax and socialise with neighbours. 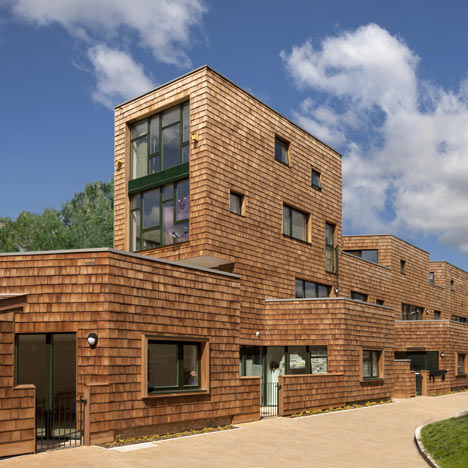 "We're interested in the space at the front of the houses becoming a social space, rather than people just using the rear gardens," Barber added. "The arches have a depth to them which we hope will make residents want to sit out when the sun is on that side of the house."

The arches are also intended to reference historic buildings where similar forms are used to distinguish entrances. A larger arch towards one end of the development leads to a small square providing off-street parking.

"There's something about the entrance of a building which is to be celebrated and we're very familiar with that in a pre-modern context,' suggested Barber. "It's celebratory and there's something quite cosy about it."

A pale brick used to clad the entire building connects it with its more traditional neighbours, whilst also ensuring a sense of mass and solidity that helps the new addition feel robust and connected with the ground.

The monolithic brick construction focuses attention on the simple forms and shadows generated by the inset sections. The varying tones and textures of the brickwork adds a complexity and rustic feel to the exterior.

According to Barber, working with Newham council ensured that the project represents a "public-spirited urban response", which aims to make a positive contribution to the street, rather than the more common developer-led approach of creating as much private space as possible.

"I think it's great that local authorities are getting involved again in creating housing on land that they own," the architect claimed.

"They have a complex remit – they need to demonstrate that they're doing things economically and viably and are using public money wisely, but they also have a remit that extends to the public good, which most developers don’t have."