Chinese studio Livil Architects has added a monolithic stone-clad canteen featuring cave-like interiors and an office building to a school in the town of Batang, Tibet.

Batang People's Primary School is an educational facility designed to accommodate Tibetan students from the town, which is located in the Garzê Tibetan Autonomous Prefecture in China's Sichuan province.

The additions to the school's existing campus were developed by architect Liu Chongxiao's studio Livil Architects, which previously oversaw the creation of a restaurant with facades comprising triangular glass and steel sections that perches on a river bank.

With their monolithic forms composed of irregular stone blocks, the buildings are intended to reference the rugged shapes of the surrounding mountains.

"I hope the buildings can create a harmonious relationship with the mountain environment," Chongxiao told Dezeen, "and through local materials and modern construction techniques, combine to produce a familiar and fresh feeling."

The canteen backs onto an adjacent sports field and incorporates banks of terraces connected by concrete steps that can also used for seating or playing on.

The steps ascend up and over the canteen's lower storeys, and are interrupted in places by vertical surfaces incorporating entrances or window openings. 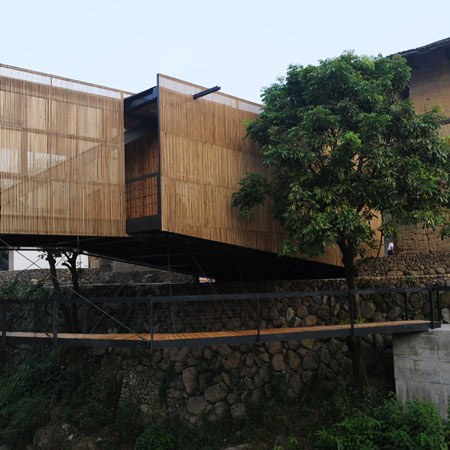 The walls are formed of local stone stacked using a traditional masonry technique and given additional structural support by a concrete grid framework.

"Viewed from the playground side, the cascading steps make the whole building show the momentum of growth from the earth," added Chongxiao, "and blend with the background of the mountain, strongly shaping the atmosphere of the place."

The stone construction method is also apparent on the other elevation, which features large windows set in black metal frames. The robust material palette of concrete and stone is continued inside the building to give it a primal feel.

"The building interior space changes to give people a space similar to the cave," suggested Chongxiao. "The rough material and sturdy shape [come] from the local architectural tradition, which has considerable cultural significance of the Tibetan."

Double-height glazed surfaces and voids, which provide views straight through to the opposite side of the building, ensure the street-facing elevation containing the entrances offers a more welcoming aesthetic.

"The permeability of the internal space in the horizontal direction make a large number of simultaneous flow of activities possible, while maintaining the diversity and good vision," said the architect.

The roof lights are arranged in different patterns. One room includes a grid of square shapes, while the largest space at the centre has two rows of rectangular openings.

A room on the upper floor, with a curving lightwell punctuating one of its walls features, rectangular skylights that spread outwards like sunbeams from the perimeter of the arcing wall.

The tactile quality of the rough stone, and the combination of light and shadow resulting from the various openings in the roof, accentuate the sense of being in some kind of cavern.

The office building applies the same materiality, but its facades are dotted with glass bricks that allow light to permeate through to the internal spaces.

The glass blocks are arranged in rows of varying lengths across all levels, and are also interspersed around the square windows.

Internally, the faces appear as highlights on walls that are whitewashed to brighten the feel of the spaces. At night, these shapes and coloured blocks set into the surfaces around them form glowing patterns visible from outside.

Photography is by Tao Xu.