Open Architecture co-founder Huang Wenjing told Dezeen the aim was to find an alternative to the "school-as megastructure" model, which has become particularly prevalent in China.

Instead of containing all of its learning spaces in a single building, the Qingpu Pinghe school features a variety of unusual structures, including a theatre and library known as "the blue whale", a multi-faceted art centre building and an organically shaped kindergarten.

"We turned away from the homogeneous megastructure typology," explained Huang, who leads Open Architecture alongside fellow co-founder Li Hu.

"Through breaking down the complex programme, recombining them into different buildings of varied scales, then weaving the separate components by landscape, we intended to achieve a whole which is rich, complex, yet coherent," she added.

This design concept takes inspiration from the African proverb "it takes a village to raise a child".

The architects wanted to create an environment offering different types of spatial experience, as they believe this improves a child's development.

"We wanted our buildings and the open spaces in between to help form, nurture, and sustain a healthy village-like learning environment," Huang said.

"The overall strategy in short; breaking down the whole into parts, then synthesising the parts into a new whole."

Occupying an entire 50,000-square-metre urban block, the Qingpu Pinghe school was designed for up to 2000 students, aged between three and 15.

It incorporates a 24-class kindergarten, a 30-class primary school and a 24-class junior high school. 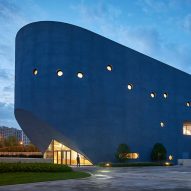 While the kindergarten has its own self-contained building, the primary school and junior high school use facilities dotted around the campus.

Classrooms for both are schools clustered together in a series of six cube-shaped blocks.

The arts centre gets its faceted form from its internal layout, which includes a pair of double-height atriums that interconnect, allowing light to penetrate.

Meanwhile the blue-painted bibliotheater – which featured on Dezeen previously – has a curved geometry, which is why the building is known as the blue whale.

Other buildings on the campus include the gym-canteen, which incorporates sports halls, a swimming pool and dining areas. This consists of a pair of rounded white volumes, with the canteen housed within a glazed box on the ground floor.

Student dormitories are contained within a pair of rounded structures, which form a figure of eight when viewed from above.

The landscape was carefully designed to support the environments of each building, combining a mix of outdoor learning spaces, sports pitches, gardens and pathways.

A 400-metre running trail winds its way around the campus, and there are also more wild areas that include tree, ponds and small plant-covered hills.

"Landscape holds the magical power," said Huang. "The gardens, fields, forest and ponds are together like fluid, mitigating and bringing the different buildings together as a whole."

The architect hopes that the project will make children feel welcome, particularly those that might struggle in a more institutionalised environment.

"We hope this new campus environment will help to foster a free and open spirit, building the students’ individuality and collective social life," she concluded.

"In every visit we've made to the school, we've seen genuine joy from the smiling faces of students running around the campus and that has been rewarding."

Photography is by Wu Qingshan unless otherwise stated.