Dutch company Ortega has designed an electric submersible for divers, which it claims is the fastest of its kind.

The MK1C submersible is designed for travelling underwater and is aimed at marine biologists, underwater archeologists and special forces.

Because of its purpose, the submarine has been built without a cover – allowing divers to easily vacate when they need to.

"It's the fastest submersible in the world," the company's co-founder Filip Jonker told Dezeen. "It's operated by divers in their diving gear, and has no cover so you can easily get out."

The vessel is designed to take divers to low depths quickly. This means that they use less oxygen on the descent and can spend longer submerged.

With enough room to transport three divers, the vessel is powered by two rotary motors that get energy from four giant batteries. Named Hancell, the battery is also made by the company, exclusively for the submersible.

On the surface of the water, the vessel is capable of reaching speeds up to 10 knots. Submerged, it reaches up to eight knots.

On board the submarine is equipped with breathing apparatus, a navigation system, extra air supplies and a cargo space of 250 litres.

This is the latest update in the race towards electric transportation, which has seen many car brands – including BMW, Mercedes-Benz and Volkswagen – already rolling out battery-powered vehicles. 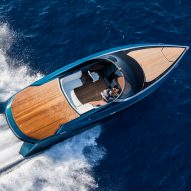 Aston Martin ventures into the seas with its first powerboat