Canadian designer Anne Sophie Goneau has transformed part of an old building into a minimalist workspace for a tech company, featuring a restrained palette of materials and colours.

The space was created for Dynamo, a digital design studio founded in 1999. The office is located in Mile-Ex, a scruffy area in Montreal that has become a creative hub in recent years.

The project entailed converting raw space inside a three-storey building dating to 1960.

It marked the first phase of a full renovation of the building, which meant everything had to be updated, from plumbing fixtures to electric wiring.

Providing an open and egalitarian environment was a primary concern for the designer.

"The mandate was to democratise the workspace, eliminating barriers between employers and employees and offering a daily variety of work experiences, adapting to the style of everyone," explained Anne Sophie Goneau, who runs an eponymous studio in Montreal.

The space features a mix of common, semi-private and private spaces. All of the workstations are identical, regardless of the employee's position in the company.

Conference rooms occupy boxes with glazed walls, while more casual spaces for interaction are dispersed throughout the office.

"Whether it's enclosed rooms, the kitchen or the coffee counters, meeting places are everywhere," said Goneau, adding that a "simple and continuous" movement between different zones encourages a flow of ideas.

The designer used a restrained material palette of glass, drywall and the existing concrete structure. The floors are painted dark blue, and the kitchen is fitted with light-grey lacquered cabinetry.

The furniture throughout the office is mostly white or black. An aluminium conference table, called Less Less, was designed by architect Jean Nouvel for Molteni&C.

A slender LED luminaire, which was custom-made, stretches across the ceiling and connects various zones.

"Materiality is reduced to its simplest expression," said Goneau. "Minimalism creates a backdrop, a canvas, giving free rein to the imagination and creativity of employees and putting them on stage every day."

Other workspace projects in Montreal include the conversion of a historic bank into an office for a tech start-up, which was designed by local architect Henri Cleinge. 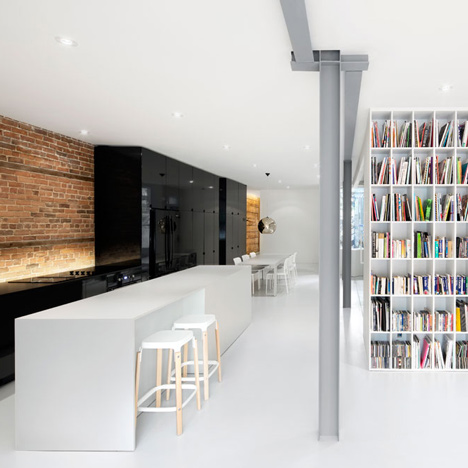