The loft space of an art nouveau building in Strasbourg, France has been converted into this light-filled two-storey apartment.

Parisian architecture firm f+f architectes renovated the fourth and fifth floor of the building, located in the Neustadt area of Strasbourg, to make one four-bedroom apartment. The attic was formerly used as maid rooms.

The 240-square-metre apartment is accessible via the lower level through a double-height entrance hall with a skylight. This level is divided into four bedrooms, two bathrooms and a home office.

The upper level has an open-plan living space with a kitchen, dining area and terrace.

The studio used black dyed MDF widely throughout its renovation. The material features in architectural elements like storage and wall coverings as well as furniture like the dining table.

"The same black MDF material, being dyed in the mass and less prone to surface chipping compared to tainted or lacquered wood, is also used for the stairs," said f+f architectes.

To contrast against the MDF, the stair banister is made of clear, laminated glass.

The original pinewood flooring throughout the apartment has been updated and treated with lye – a substance used to maintain the existing light shade of wood and to prevent it from yellowing.

The trusses are left exposed in the renovation, and additional beams have been added to the lower level.

"Three metal I-beams were used to open up the lower-floor plan and support the terrace," said the architects.

"The truss work of the roof was modified and cut to open up for the terrace and a new opening was created in the top floor for the stairs."

As well as black MDF, the kitchen also features a marble ceramic island, which sits beneath original beams.

The bathroom echoes the minimalist interior of the living space, with black MDF cupboards and marble wall and floor tiles.

The two terraces, one of which is cut into the roof, are accessible via the upper floor and offer views of the surrounding park.

"What is unusual is that the pitch of the roof is not symmetrical," said the architects. "It is steeper towards the street – in this case a very large square – probably to give the building a more imposing facade towards the square."

Other recent examples of attic conversions include a Victorian loft transformed into a space for relaxation and a Parisian apartment whose rafters were converted into children's bedrooms. 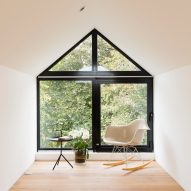 Photography is by Johan Fritzell