Car brand MINI has backed the conversion of a Greenpoint warehouse into a creative workspace, restaurant and design store, featuring a "periscope" that reflects the Brooklyn and Manhattan skylines.

Opening to the public in January 2017, it encompasses 23,000 square feet (915 square metres) of space for designers and the public to congregate and share ideas.

"Our aim is to be a catalyst for new and relevant work," said A/D/O managing director Nathan Pinsley. "Meaningful design requires exchange and stimulation and we've built a place entirely for that purpose."

Named after the research team that developed the first MINI in 1959, the venture marks an entirely new direction for the car company – forming part of a trend for auto brands diversifying their portfolios beyond vehicles.

The conversion of the building was the task of nArchitects, the firm behind New York's first micro-apartment tower, which kept the bones of the structure but rearranged its interior to accommodate many different functions.

One of the most noticeable interventions is a prism-shaped protrusion on the roof. Known as the periscope, the feature has mirrored facets that reflect light into the space below, and provide visitors with fragmented views of buildings in both Brooklyn and Manhattan simultaneously.

Also reflected by the mirrors is a colourful giant mural painted across the roof by local artist Mike Perry.

Inside, angled cement-covered partitions divide up the space but feature large openings so people can easily move and see through.

At one end is a public restaurant called Norman, which will offer coffee, snacks and informal lunch during the day, then seated dinner service in the evenings.

Adjacent, a large area acts as a casual workspace, exhibition space and events venue. This opens onto two connected outdoor spaces, which provide al-fresco seating and showcase special projects by resident designers. Turner Prize-winning UK collective Assemble are on the bill to take over the space for a period early next year.

Housed towards the back of the building is a 24-seat studio and workshop for designers, who can use a range of prototyping facilities, and space for an accelerator targeting city-focused startups called Urban-X.

A/D/O is currently accepting applications for designers to take up the first full- and part-time residencies in its workspace, where month-to-month desk rental starts at $600 (£476).

It will also host the first event in its Design Academy programme, titled Utopia vs Dystopia, from 27 to 29 January 2017. 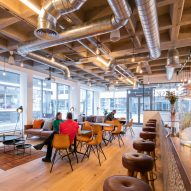