A black staircase lined with perforated white walls zig-zags up through this renovated city dwelling by Canadian studio Post Architecture.

Called the Junction Shadow House, the semi-detached family home in Toronto began as a mirror image of its neighbour.

Early in the design process, the team determined that earlier additions, such as a front room over the porch and a mudroom in the rear, were structurally unsound and threatened to destabilise the masonry structure.

"As a result, they were demolished, leaving the shell of the original house to work with," said Post Architecture, a boutique firm in Toronto led by architect Gloria Apostolou.

The street-facing facade was re-designed to include a large window box, which links exterior and interior life. The front porch is lined with dark-stained wood.

A new mudroom was conceived for the ground floor and was placed at the rear of the dwelling, enabling easy access to the backyard – "and, more importantly, access to the dog washing station in the basement", the studio said.

The third-floor attic was converted into a relaxing living area for the homeowners. The second floor contains two bedrooms, while the ground level encompasses an open-plan dining room and kitchen.

Given that the residence is tucked into a dense urban site, natural light can only penetrate from the front and rear elevations. The architect focused on maximising light entering from the south and distributing it throughout the interior.

The home features interplays between light and dark. "The finishes reflect the idea of shade, with a palette of whites, blacks and greys—and occasionally a pop of colour," the architect explained.

A black staircase that winds up through the narrow home was lined with white powder-coated metal guards that are perforated. "Spaces are visually interconnected on all levels through the feature staircase, creating views and plays with shadows," the architect said. 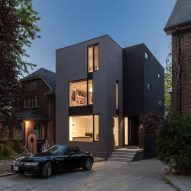 At the ground level, a platform connected to the stairs contains drawers for storing shoes.

Room were painted bright white and fitted with contemporary decor. In one area, hexagonal bathroom tiles extend into a bedroom and merge with the wooden floorboards.

Other residential projects in Toronto include a residence by Paul Raff Studio with a brise-soleil made of aluminium louvres and a home by Reigo and Bauer that features black shingle cladding and a hot pink front door.

Photography is by Revelateur Studio, courtesy of Post Architecture.