Snøhetta has extended the Lillehammer Art Museum and Cinema in Norway with a cantilevering cube covered in a layer of crinkled and polished stainless steel.

The extension is the second addition Snøhetta has created for the Lillehammer Art Museum and Lillehamer Cinema, having previously created an exhibition space for the 1960s building by Norwegian architect Erling Viksjø 22 years ago.

The firm's new addition adjoins its 1994 extension and provides further gallery space dedicated to the works of local artist Jakob Weidemann (1923-2001), as well as two new cinema theatres. It has also renovated the existing Lillehammer Cinema.

A box with a sculptural polished stainless-steel facade designed by the late Norwegian artist Bård Breivik cantilevers from the roof of a glazed volume hosting a children's workshop.

"The gallery's striking metallic wrapping reflects the surrounding context and changes its appearance with the light," said the architects.

"It is conceptually rooted in the sculptural idea of a shooting star, a dramatic symbol of the importance of Weidemann's contribution to Norwegian painting."

One cinema theatre is placed in the existing building, while the second is set below a garden between the original building and Snøhetta's first extension. This rocky garden was created by Breivik when Snøhetta carried out its initial renovation works over two decades ago.

"The integration of art, architecture, and landscape is an important feature in both Snøhetta and Erling Viksjø's work," said the studio. "For the recent expansion, it has been important to again enhance these connecting spaces, bringing the three volumes together in one complete project."

"The circulation through the museum is significantly improved, with a new connection below the art garden enhancing the visitor experience." 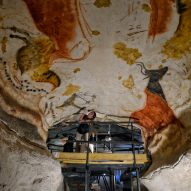 Snøhetta ranked at number 21 in the inaugural Dezeen Hot List, a comprehensive guide to the most read-about figures and institutions in the design world.

The firm is nearing completion on a cultural centre in Saudi Arabia made up of pebble-shaped forms as well as a charred-timber treehouse in Sweden.

Photography is by Photograph is by Mark Syke unless otherwise stated.