A+Awards: a former industrial space in Manhattan's SoHo has been renovated to create a new space for a contemporary art gallery, which received an Architizer A+Award last year.

New York architect Toshiko Mori and studio Hirsch Corti collaborated to renovate the landmarked building in the city's cast-iron district, which has been home to a collection of art galleries since the 1960s.

"The project meticulously restored the space, which was previously occupied by a label-making factory, to create a gallery reminiscent of that time," said Mori.

The team overhauled the ground and basement floors of the building, retaining some of the original details but replacing or updating others.

Elements that stayed include the black columns lined up in rows on both levels, along with the ceilings and wood floors. A characterful sliding metal door was also kept.

High windows on the east wall were modified to add chamfers to the sides and bottom, reflecting light into the interior.

On the upper level, the exhibition space is divided into two by a white partition. Another divider hides a library and workspace at the back.

Downstairs, a larger display area has the possibility to be adapted for different layouts. The gallery's office is also located on this floor, tucked away behind the staircase.

The Peter Freeman Gallery was a winner in the Gallery category at the 2016 A+Awards. 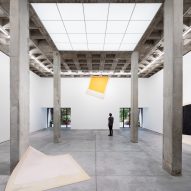