A room with wicker walls forms part of this sanctuary that Argentinian office Estudio Normal has built in the home of a Buenos Aires-based chef.

The client requested a space of solitude and relaxation, where he could spend time away from the kids, in the loft of his home inside a converted warehouse.

"He wanted a place where he could expand, learn, study," explained Martin Huberman, who runs Estudio Normal with Nina Carrara.

"His old house had a huge bookcase, so he liked the idea of a library as a place for expansion, of the mind and the soul."

The architects decided to experiment with natural materials to create the "fortress of solitude", creating soft textures designed to balance with the stark concrete walls that feature elsewhere in the home.

They divided the space up into four sections, with separate spaces for sleeping, eating, working and relaxing.

The most prominent of these spaces is a room clad in rattan wicker at the centre of the loft. The material clads the front and back of the room, forming see-through partitions with scalloped profiles.

"We found rolls of pre-woven rattan wicker with a French traditional pattern in the market," Huberman told Dezeen, "so we structured the modular layout and its curve to fit the material's original form, which naturally curves because of the linear tensions."

Inside, the room is designed to look like a typical library, with built-in shelving and storage for the client's books and paraphernalia, as well as his bicycle.

"We drew inspiration from the old typology of libraries, when they were entire rooms that housed the expansive intellectual universes of their owners," said Huberman.

Paulownia wood lines the ceiling of the space, while the floor is hardwood, matching the rest of the loft. Veneered plywood was used to build the cubby-like shelves and desks.

The space in front of the wicker-clad library is used by the client as a yoga studio or general relaxation space, while the space behind contains a bathroom and kitchen area.

There is also a concealed staircase on one side of the library, leading up to a mezzanine bedroom on top. 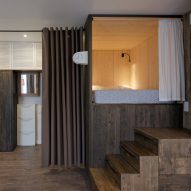