The aim was to create an open frame for a collection of shelving, sideboards and cabinets that can be produced in different sizes and materials on an industrial scale.

A thin metal frame made of aluminium segments forms the structure. Large panels of semi-transparent materials, including subtly tinted glass and perforated metal panels, slot inside in different configurations.

"Most storage furniture is made of pieces of wood, like they are boxes made of boards," he continued. "The idea is to get rid of the boards of wood or whatever it is and to try and produce open structures, which can be filled with different materials."

Invented in the Roman era, coloured glass has recently seen a resurgence among designers such as Patricia Urquiola, who used iridescent glass to create a furniture series for Glas Italia last year.

Coloured glass also emerged as one of the trends at Milan design week last year. Urquiola showed a new cabinet featuring stained-glass doors, and the Campana brothers presented a buffet with blob-shaped holes filled with green and blue glass.

Other variations for the Mesh furniture include the insertion of flaps, doors and drawers into the gaps, while a wide variety of coloured matt lacquer finishes from red to dark green and purple are also available to coat the metal.

Aisslinger, who has created pieces for Moroso and Flötotto, launched a cabin covered in colourful Kvadrat textiles at last year's IMM Cologne. 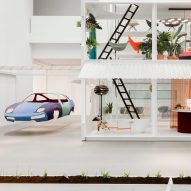 Earlier this year he created an installation that predicted a whimsical, sustainability-focused future that combines domestic life with farming and robotics.

IMM Cologne continues until 22 January 2017. Other products that have launched at the fair include the Triiio tables by architect Hans Bølling, which were designed in the 1950s but never before produced.