The Rue Saint-Honoré offices of skincare brand Aesop have been transformed by Benjamin Paulin into a temporary space for facial appointments and treatments.

The collaboration between Aesop and Paulin, son of iconic French designer Pierre Paulin, began when he passed by the brand's Aesop Condorcet store and saw a vintage armchair by his father through the window.

Aesop's internal architect, Jean-Philippe Bonnefoi, had long been an admirer of Pierre's work, and formed a relationship with Paulin, Paulin, Paulin – the family business that circulates, develops and preserves the works of Pierre Paulin.

They then began to work together on transforming the Rue Saint-Honoré offices, which had become too small for the team, into a space open to the public by appointment.

"The space was originally Aesop offices," said the company. "It is three rooms in a row: an entrance to leave the world behind, a middle room to sit down and discuss the treatment, and a third room where the treatment will happen.

"When the customer books a facial treatment, they have the whole space to themselves for 90 minutes," it continued.

Paulin, Paulin Paulin advised Aesop on pieces that would reflect the space's intention, while not turning it into an exhibition of his work.

A mix of vintage and new pieces were chosen, including the Anda chair, Mushroom stool, Tanis desk, the Elysée shelves and pedestal table designed for Ligne Roset, Globe chairs for Artifort and the Osaka sofa designed for La Cividina.

"The furniture has been chosen first on the criteria of functionality," Aesop said. "The idea was not to recreate a Paulin museum or showroom but use appropriately chosen pieces of furniture to create a specific atmosphere and make the treatment session interesting for the customer." 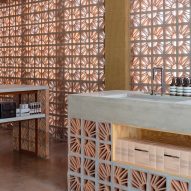 Designers including Case-Real, JamesPlumb and Torafu Architects have all contributed to the skincare brand's fast-growing portfolio of more than 100 shops worldwide.