The competition launched by the UK Holocaust Memorial Foundation requested the teams deliver an "emotionally powerful and sensitively designed memorial", which is to be located near British parliament in Victoria Tower Gardens.

Each team has drawn up proposals for a modest memorial above ground and a subterranean learning centre.

"This striking new structure will honour victims and survivors of Nazi persecution, educate future generations about the dangers of where prejudice and hatred can lead and serve as a powerful statement of our values as a nation," said a statement from competition organiser Malcolm Reading.

The 10 contending teams were shortlisted from over 90 entrants to the competition. A public consultation is now being held online to assess the winning design.

See all 10 shortlisted designs for the National Holocaust Memorial and Learning Centre:

"We have approached the National Holocaust Memorial and Learning Centre as an opportunity to unearth the complexity of the Holocaust story, which we see as a series of layers that have become hidden by time," said the team.

"Our proposal aims to reveal these layers not through a static symbol commemorating the past, but through an organic living monument that evolves over time, capable of both affecting and being affected by its users."

David Adjaye and Ron Arad previously collaborated on a design for Canada's National Holocaust Monument, but were defeated by Daniel Libeskind.

We stand at a moment of transition – a time when those who lived through the Holocaust and witnessed the atrocities first-hand will no longer be present to provide testimony. Our proposal for the memorial is not an object, but the creation of a sacred space to serve the voices of survivors," said the team.

"Folding back like a prayer shawl, it holds visitors in an embrace with the spoken word while framing a view to Parliament, underlining our shared accountability."

"Meteorites, mountains and stones are often at the centre of places of reflection, especially in the Jewish tradition. They call on the vastness of nature to be a witness to our humanity," said the team.

"A memorial to the Holocaust must be contemplative and silent, such that it evokes our empathy. It must be a promise to future generations that this terrible chapter in human history can never occur again."

"The catastrophic events of the Holocaust took place outside the UK and the mass graves, remnants of atrocity and concentration camps that are found in mainland Europe do not exist on British soil," said the team.

"A memorial in London will not, therefore, commemorate a particular place, but instead it can embrace a universal theme and foreground the first-hand testimony of survivors."

"The subtlety of the design of the UKHM gradually reveals the power of the opposing forces that created the descent into a horror of hitherto unimaginable scale, and a humanity of unlimited compassion and selfless commitment," said the team.

"To create a memorial that is commensurate with its prominent site, and appropriate to content of such gravity, the architecture most suitable to serve the purposes of remembrance and caution against the repeat of intolerance, is one of restraint, yet notable form."

"With minimum disturbance to the park, a ramp descends into the earth. Evocative of train tracks that terminated in the camps or the brown brick lined corridors leading down to the gas chambers. This is the way to the Time Left Memorial," said the team.

"Projected images of an endless procession of human figures resonate with exodus or a human text that seems to go on forever like the unspoken testimonies."

"The Memorial is an ear, that connects visitors with the voices and testimonies of those who experienced the Holocaust. Set within the individual voids that occupy the walls of the Memorial, their sonic aggregate becomes the primary material of its sensory construction," said the team.

"Visitors descend from the Gardens through a series of thresholds and passages, encountering individual voices as they form a collective, of those who speak of past horrors and the grave risk of authoritarianism and barbarism returning today."

"In Jewish tradition, the laying of a stone at a grave marks a visit by relatives, remembering the deceased. This simple act binds generations together," said the team.

"The legacy of the Holocaust – or Shoah – is not just the elimination of nearly six million Jews; but the grievous loss of generations that never came to be – millions of stones yet to be placed."

"The Memorial is a composition of two arcs facing each other and a water pool. The first arc describes the Holocaust, the other describes how it was experienced in the UK," said the team.

"The visitor walks through the arcs – rust spaces – symbolically along the iron rail tracks. The destination is either a death camp or a train journey across the channel into the UK. The area between the arcs and the steel surface of the Memorial creates a bare space of tranquillity."

"The Memorial communicates a shadow that has been cast forever on the history of civilization. Since there is no redemptive meaning in the Holocaust, visitors carry this shadow with them as they journey underground," said the team.

"A dark, reflective metal plane cuts into the sky. The visitor walks down a wide timber ramp, passing through this plane into the underground." 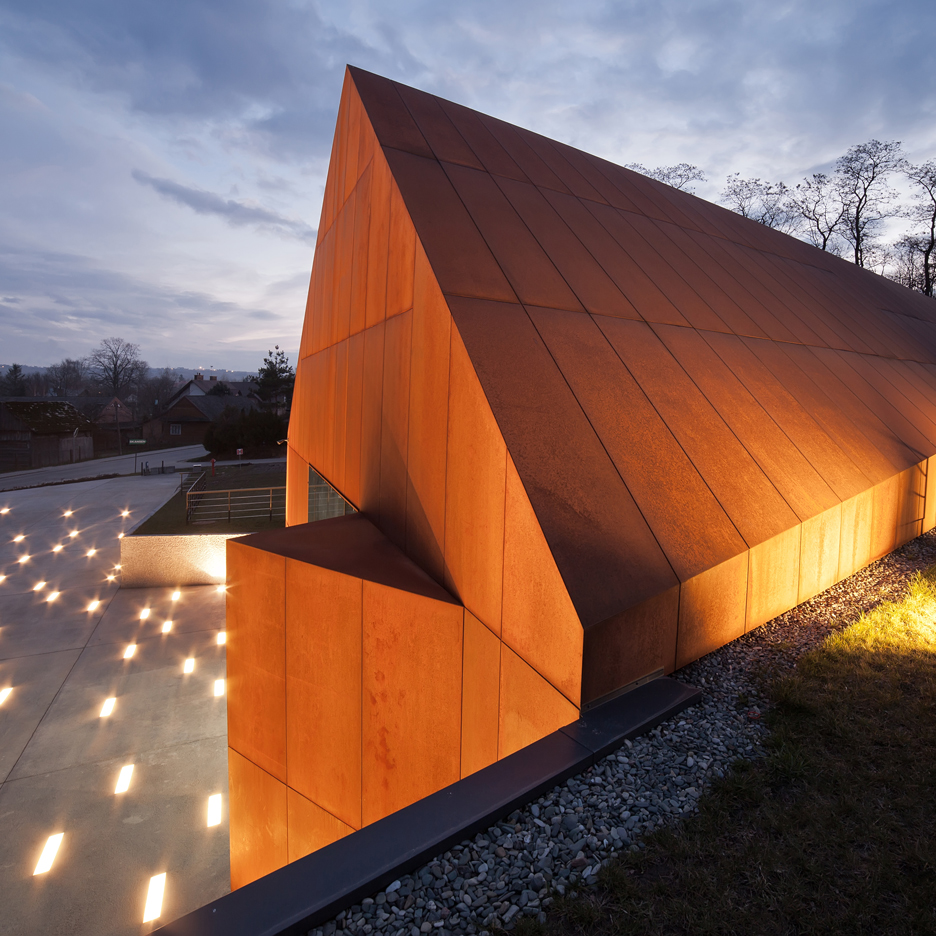 Images courtesy of the architects and Malcolm Reading Consultants.