Dezeen promotion: Czech brand Bomma has released its new collection of glass lighting, which includes a bondage-inspired lamp and a pendant modelled on soap bubbles.

Named Contemporary Design Meets Brutalist Architecture, the collection was photographed inside the Czech Embassy in Berlin.

Designed by Vladimír and Věra Machonin, and built between 1970 and 1978, the building is an example of the Czechoslovak brutalist architectural style.

"It's a style that had no reason to flourish in the west, yet forms an integral part of the eastern-European heritage, with many ultra-modern and monumental works created during this era."

Ota Svoboda's hand-blown Soap light plays with varying colours and transparency. It is based on the continuously changing shapes created by soap bubbles.

Designer Kateřina Handlová has contributed two pieces inspired by tied objects, including the Shibari collection, which references the Japanese technique of binding objects with ropes as a way of communication.

For the Tied-up Romance light, Handlová used leather straps and metal fastenings, aiming to express the fragility of glass.

Other products in the collection include the ephemeral Lantern by Jan Plecháč and Henry Wielgus and the giant Tim Lights by Studio Olgoj Chorchoj, whose members also serve as Bomma creative directors.

Bomma was launched in 2012. It has previously collaborated with Jakub Pollág, Maxim Velčovský and Arik Levy. 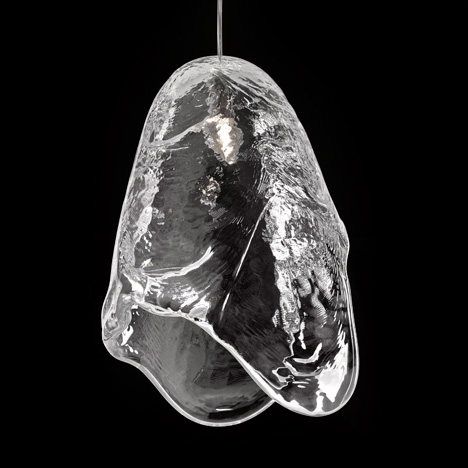