This holiday home on the West Dorset coast is made up of four irregular larch-clad blocks, and was designed by AR Design Studio to replace a house destroyed in a landslide.

AR Design Studio was originally asked to extend an existing holiday home on a cliff top on the coastline of Lyme Regis. But half way through the planning process, the existing house broke in half during a landslip.

The Winchester-based architects were then tasked with completely redesigning the home, and used the idea of movement and fracture as a reference.

To create the Crow's Nest, the team broke up the traditional cabin shape of many holiday homes into four volumes of varying sizes and heights.

Each of these larch-clad "pods" are offset and face different directions, as if they have slid away from one another. Each of the rooflines also has a different slant.

The four blocks are interconnected and stand on a low timber deck surrounded by foliage.

"The design concept starts as a traditional cabin-like-form that then splits, twists and rotates, resulting in four pods," said the architects. "The outcome is a beautifully haphazard rough-sawn larch clad house that silhouettes against the wooded backdrop."

"The result is a playful and calm space for the owners to enjoy weekends with family and friends, while taking in the spectacular and isolated location in which it sits," they continued.

The smallest of the four blocks is the entrance, which leads through a hallway into the central pod that is occupied by the kitchen, dining and living room.

A large set of sliding glass open the space to the coastline setting, with uninterrupted views of the English Channel beyond.

Wooden kitchen cupboards line the back wall of the space, where a long window faces into the forest behind the house. The same wood is also used for the central kitchen island, which is set below a row of pendant lights.

The lounge area occupies one side of the space in front of the kitchen and has a black wood-burning stove on a raised platform and a table made from wooden pallets.

A wooden dining room table is set into a nook on the other side of the space below another set of hanging lights.

Next to this, an opening leads to the two-storey tower pod, which features the children's bedroom, utility room and shower room on the ground floor below.

Wooden stairs that past a window to the first floor master-bedroom suite.

The en-suite bathroom is placed to the rear, while the bedroom occupies the front facing a towards the sea. A mesh cocoon-like seat hangs down in front of the window.

The bedroom, like the rest of the property, is neutrally finished with white-painted walls and grey floor tiles.

At the opposite end of the house, the fourth volume houses guest quarters, including a bedroom, two bunk rooms, and a bathroom. This entire section of the house can be closed off when not in use.

The architects also worked with British engineers Eckersley O'Callaghan to ensure the house is protected against future landslides.

A concrete slab is built into the ground with a series of strategically placed walls on top of it. A floating structural frame was then laid above these walls to act as an adjustable raft in case of future movement.

Beneath the frame, there are specific places for mechanical jacks to be positioned so that the house can be securely re-levelled.

AR Design Studio was founded by architect Andy Ramus. Other projects by the studio include the two glass-fronted volumes it added to a 1970s house in southern England, an extension comprising a timber-clad box and the conversion of an old stable block into a three-bedroom family house. 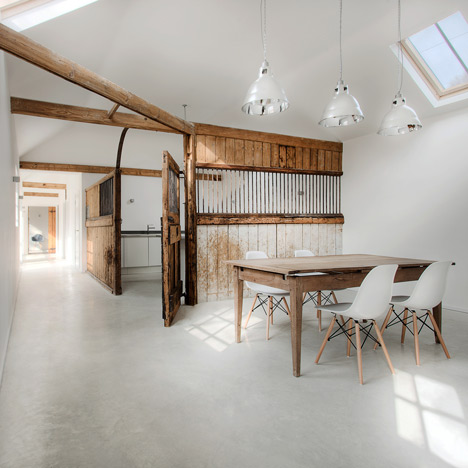