Intersecting wood-clad volumes create a playground for children in a Massachusetts suburb to scurry through, clamber over and zip-wire from.

The Five Fields Play Structure was designed by Brandon Clifford of Matter Design and Michael Schanbacher of FR|SCH Projects.

It is located on a piece of common land shared by residents of Lexington's Five Fields neighbourhood – a mid-century modern development established by The Architects Collaborative (TAC) in the 1950s.

"TAC conceived the neighbourhood as an experiment and the community, wishing to keep the experimental spirit alive, requested a structure that is both safe and exhilarating for the kids," said Clifford and Schanbacher.

"They wanted something that would challenge the kids without any singularly functional elements."

The duo consulted the project's prospective users – the local children – during the design process.

Set on a sloped site, the play structure is made up of a series of cuboid sections all clad in the same light-coloured timber.

These elements slot together and connect at various points, creating routes with rope obstacles to be conquered along the way.

One of the boxes forms a tall lookout, while another provides a jump-off point for a 66-foot-long (20-metre) zip wire.

Due to the slope, the structure cantilevers at its end so a shelter is provided underneath.

The whole structure is scaled to ensure children can pass through with ease, but adults can still gain access in case of an accident.

"Designing a play structure intended for kids is a unique and challenging project," said the duo. "While there are irreducible standards that manage accessibility and function in the daily lives of adults, play is neither standard nor strictly functional."

Without intending to limit access to any specific part of the structure, possible entrances are suggested using colourful graphics by designer Johanna Lobdell.

At these points, users can shimmy up through a vertical tube or pull themselves up onto a ledge, while architectural elements elsewhere like stairs and doors lead to nowhere.

"These decisions produce escalating challenges for the kids; mitigating risk and ensuring the correct age-range have access to the more treacherous areas instead of withholding them entirely," the architects said. "Older kids climb over while younger crawl under."

Similarly architectural playground equipment has been completed by Asif Khan, who added an elevated wooden play area to east London primary school, and Assemble, which produced a climbable landscape of ice-cream-coloured shapes based on brutalist structures. 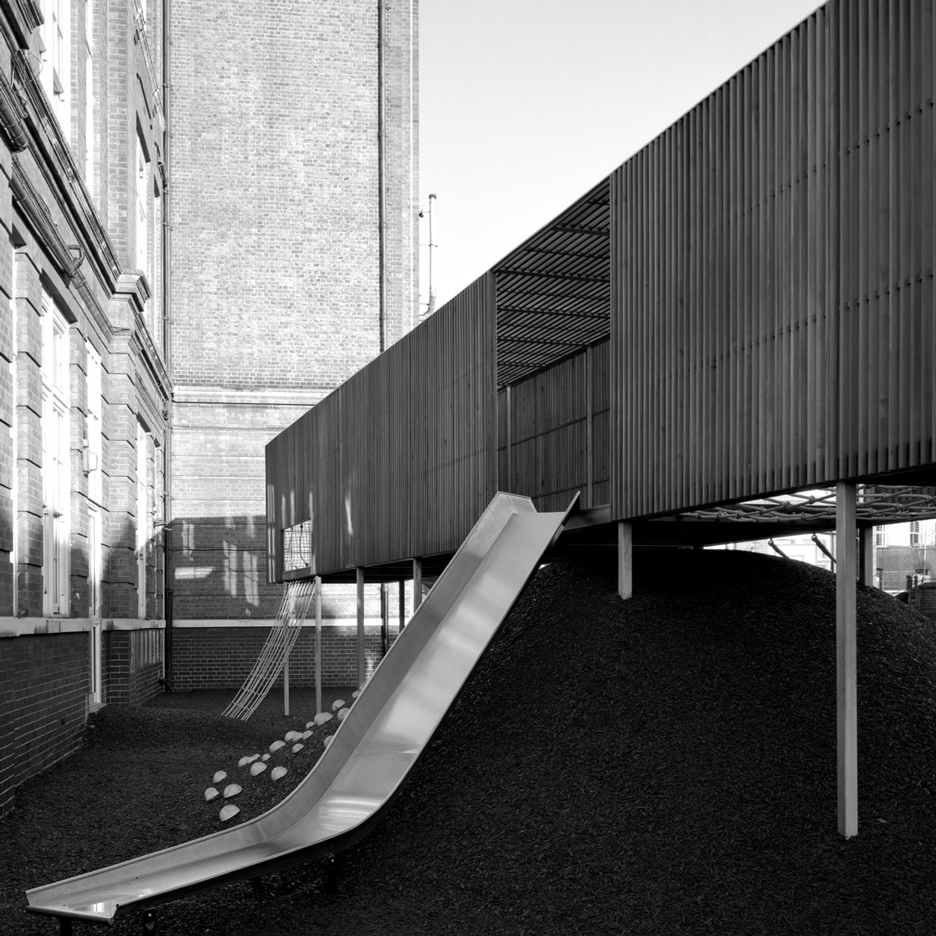 Photography is by Brandon Clifford.