Over 200 artists, musicians, writers and curators have come together to form a coalition named Hands Off Our Revolution, which will put on contemporary art exhibitions to confront right-wing populism.

The group – which includes leading figures such as Steve McQueen, Laurie Anderson, Ed Ruscha, Cornelia Parker, Wolfgang Tillmans and Anish Kapoor – announced its existence yesterday with the launch of its website.

On the site, the collective outlines its belief that art can "help counter the rising rhetoric" of right-wing populism, as well as "increasingly stark expressions" of xenophobia, racism, sexism and homophobia.

To do this, they plan to put on a series of contemporary art exhibitions confronting the issues.

According to the website, these exhibitions will feature "critically engaged" contemporary artists, and will take place in major art institutions as well as alternative public spaces.

Any proceeds would go to arts and activist causes, as well as the building of the coalition. 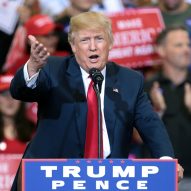 "As artists, it is our job and our duty to reimagine and reinvent social relations threatened by right-wing populist rule," reads a statement on the website.

"It is our responsibility to stand together in solidarity. We will not go quietly. It is our role and our opportunity, using our own particular forms, private and public spaces, to engage people in thinking together and debating ideas, with clarity, openness and resilience."

Artist Adam Broomberg, a driving force behind the project, hopes the movement will help individuals to channel their anger towards recent events affecting the political climate.

"What is important is that it is not just seen as America's problem, or Europe's problem, so we are planning shows in Mexico and Lagos," he told the Guardian.

The same political events, in particular Donald Trump's election as US president, have also prompted a number of responses from the design and architecture industries.

Apple, Amazon, Google and Airbnb were among many US tech companies to have denounced his so-called Muslim ban, which also led architect Steven Holl to call for his impeachment.

Kapoor, who doesn't shy from making controversial statements, said that the coalition is representative of people with "good conscience".

"Our art affirms our humanity and we insist on inclusion of all and for all," he said. "We call for action by people of good conscience to stand against the abhorrent policies of the governments that claim to represent us."

As well as big-name artists such as Kapoor and Tillmans, the coalition also includes gallery chiefs, musicians and writers.

Iwona Blazwick – director of the Whitechapel Gallery in east London – reflected on how industrial and manufacturing are disappearing with no alternative being offered.

"I have not heard a single politician put forward a credible strategy for devising inclusive, rewarding and sustainable forms of work," she said. "Which is why culture must step in."

Hands Off Our Revolution plans to announce its first exhibitions next month. The full list of contributing artists can be seen on the coalition's website.