The Royal College of Art has again been named the world's leading art and design university, according to a recent international survey.

It is the third consecutive year that the Royal College of Art has received this accolade, having come top of the rankings in both 2016 and 2015.

"We are delighted to be again recognised as the world's top university for art and design for the third year running, and to be consistently the only university selected since the art and design subject areas were added to the QS World Rankings in 2015," said rector Paul Thompson.

"The RCA is highly selective, taking only the most talented artists and designers. Those students go on to transform the world – in design, fine art, fashion and engineering."

Thompson also described the QS ranking as a "resounding endorsement of the British higher education", with Cambridge, Oxford and UCL joining the RCA among the world's best institutions.

But aside from the RCA, the top five schools on the art and design universities list were American. MIT took second place, Parsons The New School for Design took third, Rhode Island School of Design was named fourth best, and Pratt Institute came in at number five.

University of the Arts London narrowly missed out on a top five spot, coming in at number six.

The QS University Rankings assesses the best international universities based on three assessment areas: academic reputation, employer reputation and research impact. The rankings are based on the opinions of academics and employers.

The endorsement mirrors the results of the inaugural Dezeen Hot List, where the RCA was named the most popular design school.

In 2020, the school will move into its new Battersea campus designed by Swiss firm Herzog & de Meuron, which fought off competition from a shortlist of six other high-profile firms to win the contract. 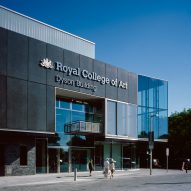