Toogood's fifth set of furniture, artworks and accessories is currently on show at Friedman Benda's space in Chelsea.

The pieces are made from a trio of contrasting materials and all feature rounded shapes.

"Faye Toogood's Assemblage 5 takes on a pantheistic tone, tapping into age-old animist notions of the elements water, earth and moon," said the gallery. "The British designer's signature explorations of geometry and form are visible throughout."

The first collection of furniture and lighting in the Assemblage range launched during the London Design Festival in 2010.

Toogood's subsequent releases have explored a variety of shapes and materials, including the angular iridescent pieces from the third collection in the sequence.

Assemblage 5 shares some of the "fat" forms of the Roly-Poly furniture found in collection four, but fibreglass has been replaced with glass, silver nitrate bronze and cob – a natural building material made from soil, water and organic fibres.

The cob is meant to represent earth, the grey metal references the moon, and the glass evokes water.

Shapes in the furniture are based on tableware: a chair with a scoop-like back is modelled on a spoon, while stools and tables are designed to look like cups.

The collection also include a set of semi-circular wall hangings, decorated with collages of photographs showing body parts, along with painted areas. These "tapestries" are also intended to be worn.

The pieces are displayed against textured white surfaces across the walls and floor of the gallery, and will remain on view until 15 April 2017.

Previous exhibitions at the space have included Nendo's 50 Manga Chairs.

Also currently on show in New York's Chelsea neighbourhood is a series of unconventional domestic items at Chamber. 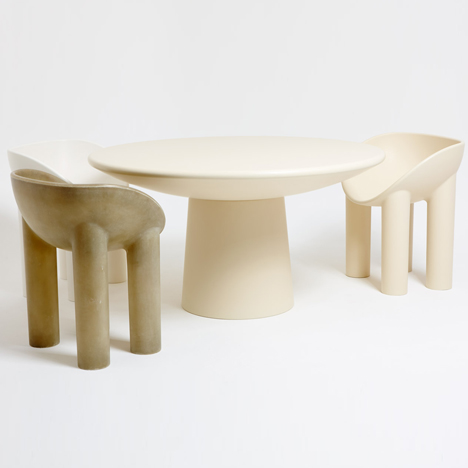