The next sculpture to be erected on the Fourth Plinth in London's Trafalgar Square will be a winged bull by artist Michael Rakowitz, which is based on an ancient Iraqi artefact destroyed by Islamic militant group ISIS.

Rakowitz's sculpture, titled The Invisible Enemy Should Not Exist, was announced as the successor to David Shrigley's giant thumb today.

It is based on a winged bull that stood at the gates of the ancient Assyrian city of Nineveh. The artefact was destroyed during the storming of the Mosul Museum in Iraq in 2015.

To create the piece, which will be installed in 2018, the Iraqi-American artist used layers of empty date syrup cans – something he intended to represent one of the country's industries to have been destroyed by the war.

It forms part of an ongoing project by Rakowitz, during which he has attempted to recreate 7,000 archaeological artefacts stolen and destroyed during the Iraq war.

The judging panel also announced the installation for when Rakowitz' sculpture is taken down in 2020 – a giant cherry-topped whirl of cream by artist Heather Phillipson.

Both pieces will occupy the empty stone plinth at the corner of the square, where the three other corner plinths are occupied by traditional sculptures of historic figures.

Justine Simons, London deputy mayor for culture and creative industries, described the two works as "highly contrasting" while praising their ability to get the public's attention.

"Over 9,000 people have had their say on what was an incredible shortlist, and it's clear that these two hugely contrasting artworks stand out for their visual impact as well as their unique ability to make the viewer stop and think," said Simons.

"The Fourth Plinth is the world's most loved and talked-about public art platform – it is pioneering, inventive and surprising, and above all, shows that London is open to creativity and ideas from around the world."

The Fourth Plinth Programme was initiated in 1998, and has seen the likes of Antony Gormley, Hans Haacke and Katharina Fritsch – who created a giant blue cockerel – install their works on the square's empty plinth.

The current installation is Shrigley's Really Good, a giant thumbs-up. 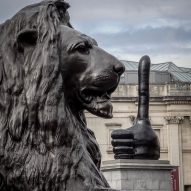