The concrete walls and roof of this headquarters for the Greek city of Lamia's Municipal Water Supply are interrupted by voids and fissures that carve out different routes through the building.

The building is set on the eastern edge of the city at a junction of two main roads so local studio Vtria Architects aimed to create "an iconic, interactive and extroverted building that is open, accessible and welcoming to all of its users."

The desire to promote the building's connection with the surrounding city informed a design with an east-west axis that follows the adjacent road.

The main facade is broken up into a series of volumes sheltered beneath a huge concrete roof supported by tall cylindrical pillars.

Gaps between the concrete and glass boxes lend the facility a permeable feel that promotes its public character. The voids accommodate different entrances that lead towards a central courtyard.

"By adding or subtracting pieces of the outer structure, the building's shape is changed and transformed to create a vivid and dramatic effect," explained Vtria Architects.

"This stereotomic process moulds the project's clear geometric shapes into producing a notional structure that expands the spatial experience."

A sloping plot led to the building's division into a two-storey northern wing and a three-storey wing to the south, with the main administrative areas distributed throughout an L-shaped block that flanks the courtyard on two sides.

The reception area is housed in the western portion of the facility, which has the most direct connection to the rest of the city. This space is entered via a long ramp that extends above a lawn towards a glazed section of the facade.

Alternative entrances interrupt the other elevations, and a series of vertical, horizontal and diagonal axes split the building into a cluster of angular volumes with a variety of circulation options.

"The existence of a large number of entrances, staircases and ramps gives movement to the synthesis and allows the visitor to enjoy a vast choice of architectural promenades and alternating views of the exterior and the interior of the building and its surroundings," said the architects.

The courtyard at the centre of the headquarters provides outdoor seating, planting and water features that create an environment suited to relaxation or social activities.

Shade and the cooling effect of the water surfaces also helps to create a micro-climate that reduces temperatures inside the surrounding blocks during the hot summer months.

On the southern side of the courtyard, a concrete volume containing an amphitheatre for hosting cultural events incorporates a large window that provides a visual connection with the outdoor space.

The double-height reception area is largely lined with glass to create a bright and welcoming environment for visitors.

A boardroom is accommodated in an oval pod suspended above this space, which is accessed via a bridge on the first floor. 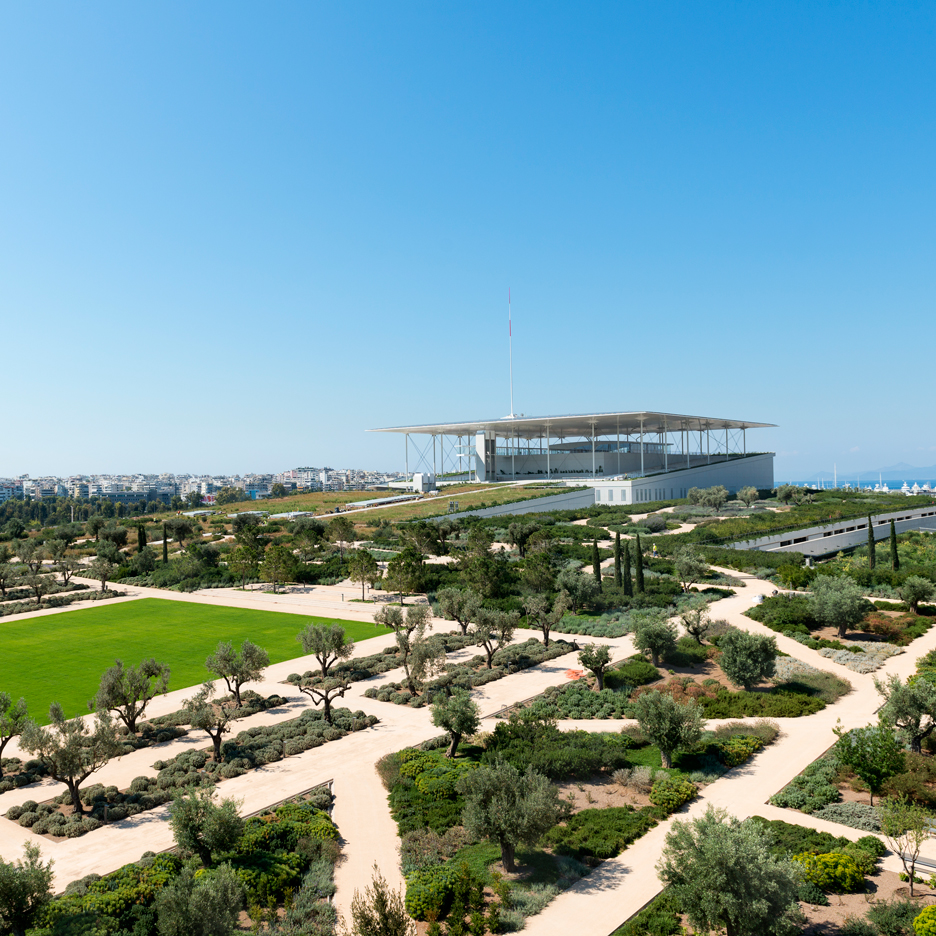 Photography is by Dimitris Triantafyllou.