Slovakian architecture studio DF Creative Group has converted a former heating plant in Bratislava into a cultural centre, complementing its industrial structure with a series of contemporary additions.

The heritage-listed Jurkovič Heating plant, originally designed in the 1940s by Dušan Jurkovič, was formerly part of the Apollo Refinery.

While the rest of the refinery was demolished, the former heating plant now sits at the centre of the Sky Park Masterplan by Zaha Hadid Architects, which completed its first phase in 2020.

Following an invited competition, DF Creative Group, led by architect Martin Paško, was awarded the project to convert the plant into a space that would combine co-working offices with public exhibition, events and hospitality areas.

Looking to celebrate the original industrial structure of the plant, DF Creative Group approached its retrofit as the creation of distinct contemporary structures within its original, historic shell, organised around the full-height turbine hall at its centre.

Between the vast, exposed concrete volumes of the former hopper heaters, steel-link bridges and glass walls create new routes and lines of sight through the building.

"The architectural solution uses the void interior space in the boiler room and the turbine hall for the construction of new independent structures, while creating new areas and floors consistently offset from the original building," explained the practice.

"This concept makes it possible to separate and distinguish historical constructions from new ones, while simultaneously embracing and respecting history and harmony," it continued.

The ground floor of the building has been reimagined as a "living square", focused around a skylit atrium that extends the entire height and length of the building.

A restaurant, cafe, contemporary art gallery and multi-functional hall are all organised around the ground floor atrium, in between the existing columns of the original structure. 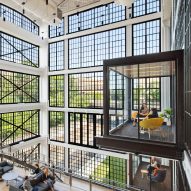 The office interiors have been finished with minimalist, contemporary detailing to create a contrast with the historic backdrop of the plant, with lighting fitted directly to existing trusses or walls and complemented by simple furniture and planting.

"The intervention highlights many historical construction details, including the structure's original rugged columns and three cominant hoppers," explained the practice.

"The reconstruction created an original representative space with materials in their original 'roughness' and colour," it continued.

At the top of the building, a roof terrace provides visitors with views out over the newly developed Sky Park, where three new apartment towers by Zaha Hadid Architects sit within a green landscape.

The project is one of several recent schemes across the world transforming former power plants into new cultural spaces that celebrate their industrial heritage.

In China, ARCity Office adapted the concrete frame of a power plant into a new, glazed community hub, while in the UK, London's iconic Battersea Power Station recently re-opened following its transformation into shops, offices and apartments.