Dezeen promotion: Japanese designer Tokujin Yoshioka is collaborating with LG to create an installation of illuminated chairs during this year's Milan design week.

Titled SF Senses of the Future, the installation will be made up of 17 glowing chairs, arranged in a large grid.

They will be made out of LG's ultra-thin OLED lighting panels – a type of light source that creates illumination across a surface rather than from a point.

These dynamic lighting elements will create a setting that LG claims will feel like science fiction.

"When we were children, we freely imagined the future and we sensed our destinies in our dreams, and SF Senses of the Future is an expression of science fiction, technology, space and life highlighting the state of LG's technology," explained Tokujin Yoshioka.

"The installation is a poetic phenomenon that can only be described as a tapestry of light – a truly futuristic dimension which confounds and transcends the human senses."

Tokujin Yoshioka has worked on a number of impressive installations in the past. He recreated a snow storm at the Mori Art Museum in Tokyo in 2010, while his Spectrum project experimented with light projection.

For this latest project, his aim is to combine LG's pioneering lighting technologies with everyday objects. Visitors will be invited to interact with the exhibition, which will include sitting on the illuminated chairs.

"The marriage between cutting-edge technologies by LG and Tokujin Yoshioka's design perfectly expresses LG's human-centered design philosophy and our commitment to delivering of our promise of innovation for a better life," said Noh Chang-ho, head of corporate design for LG Electronics.

SF Senses of the Future is on show at Superstudio Piu from 4 to 9 April 2017, as part of Milan design week. 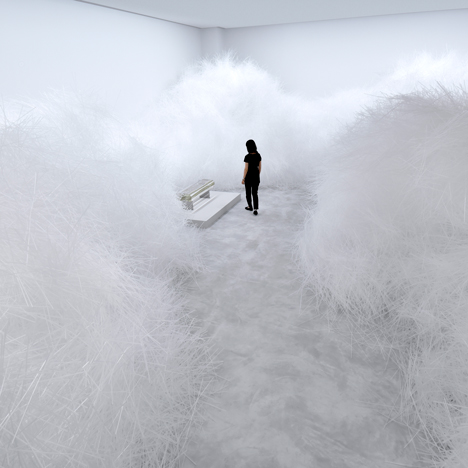