Delicate lanterns made from pleated paper and table lamps that display assorted objects are among Dezeen editor Amy Frearson's highlights from lighting fair Euroluce in Milan.

If you're visiting in 2017, tag your Instagram pictures with the #milanogram2017 hashtag for a chance to win £500 to spend at Dezeen Watch Store.

Read on for our pick of the 10 best new lights on show:

New Tribe Members of the Mamo Nouchies by Ingo Maurer

Nearly two decades after launching his Mamo Nouchies, a series of lights made from pleated Japanese paper, German designer Ingo Maurer has created a variety of new shapes. Among them is Moonati, a wall light with a shell-like shape, and Yoruba Rose, the table version.

Wire Ring by Formafantasma for Flos

A flattened power cord forms a sculptural support for this wall light – one of two that Italian duo Formafantasma has designed for Italian brand Flos. Soft illumination comes from the central LED ring.

Find out more about Wire Ring ›

Known for his clean lines and classic shapes, London-based Michael Anastassiades has added three sculptural designs to his Mobile Chandelier series. This is the most impressive of the three, combining horizontal lines with semicircles.

Lollipop by Boris Klimek for Lasvit

Although this light was actually launched by Lasvit in late 2016, it makes its Milan debut this year. Developed by Slovakian designer Boris Klimek, it comprises colourful glass slabs that resemble boiled sweets.

Blow Me Up by Ingo Maurer

Another highlight from Ingo Maurer's stand, this versatile light is encased within an inflatable tube. It can be suspended, hung, leaned or simply placed on the floor, and has an integrated sensor for a switch.

These simple pendant lights look like they they are wearing hats – some pointed and some circular. A collaboration between designers Jonah Takagi and Hallgeir Homstvedt, they are available from Roll & Hill in black, brushed brass, oil-rubbed bronze or polished nickel.

Cipher by Yabu Pushelberg for Lasvit

North American design duo Yabu Pushelberg worked with hand-blown crystal to create these lights for Lasvit. Each piece is decorated with slender lines and connected by polished golden links.

Gaku by Nendo for Flos

Another highlight from the Flos stand, these box-shaped lights are used in combination with other objects to create framed scenes. Designed by Japanese studio Nendo, they can be paired with bowls, vases, a mirror and more.

Modelled on acrobats' hoops, these brass lights link together. Designed by the in-house design team at New Zealand brand Resident, each hoop is surrounded by LED lighting.

More circus-inspired lighting can be spotted at the Flos stand, where Michael Anastassiades has created a similar effect with different shapes. 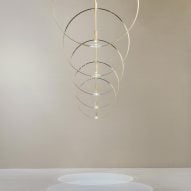