This house in San Francisco by local firm IwamotoScott has an angular facade made up of wooden elements, and a layout organised around a central staircase illuminated by a light well.

The project is located in Noe Valley, a well-to-do area of the city. The architects were able to develop the property after a dilapidated dwelling on the site was demolished.

"[The home] is a speculative infill development for a builder in San Francisco whom we've worked together with on several projects," said IwamotoScott.

Noe Valley House was completed in 2016, and comprises four bedrooms distributed on three levels. The basement accommodates a two-car garage, and a rooftop terrace overlooks the San Francisco Bay area.

The home is entered up a short flight of steps that leads directly into the living room. The central portion of the house is occupied by a wooden staircase with open treads, and is illuminated by a large skylight.

"Situated at the heart of the house, the lightwell and stairwell act together as a spatial hinge between living/dining and kitchen/family on the main living level, and between kids' and parents' bedrooms on the upper sleeping level," said the studio.

The back of the property contains the kitchen and dining table. A fully-glazed family room protrudes from the main volume of the building and opens out onto an enclosed garden.

"Bedrooms and bathrooms on the next level up also flank the central lightwell and stairwell, which culminates onto a roof deck on the top level, with panoramic views of San Francisco and the Bay," said the firm, which previously worked on a parking garage for Miami Design District.

The facade's angular geometry is informed by the setback rules dictated by surrounding properties. "The subtly-angled facade design was created by adapting to different setbacks of the neighbouring houses, and as a response to the downhill views to the east," they explained.

Cedar boards make up the building's exterior, and are separated by blackened spacer boards. Other materials used on the exterior include aluminium-framed windows and cast-in-place concrete.

Inside, the architects opted for a restrained palette of white walls and wooden floors. Modern furniture pieces, such as an Eames lounge chair, complement these surfaces. 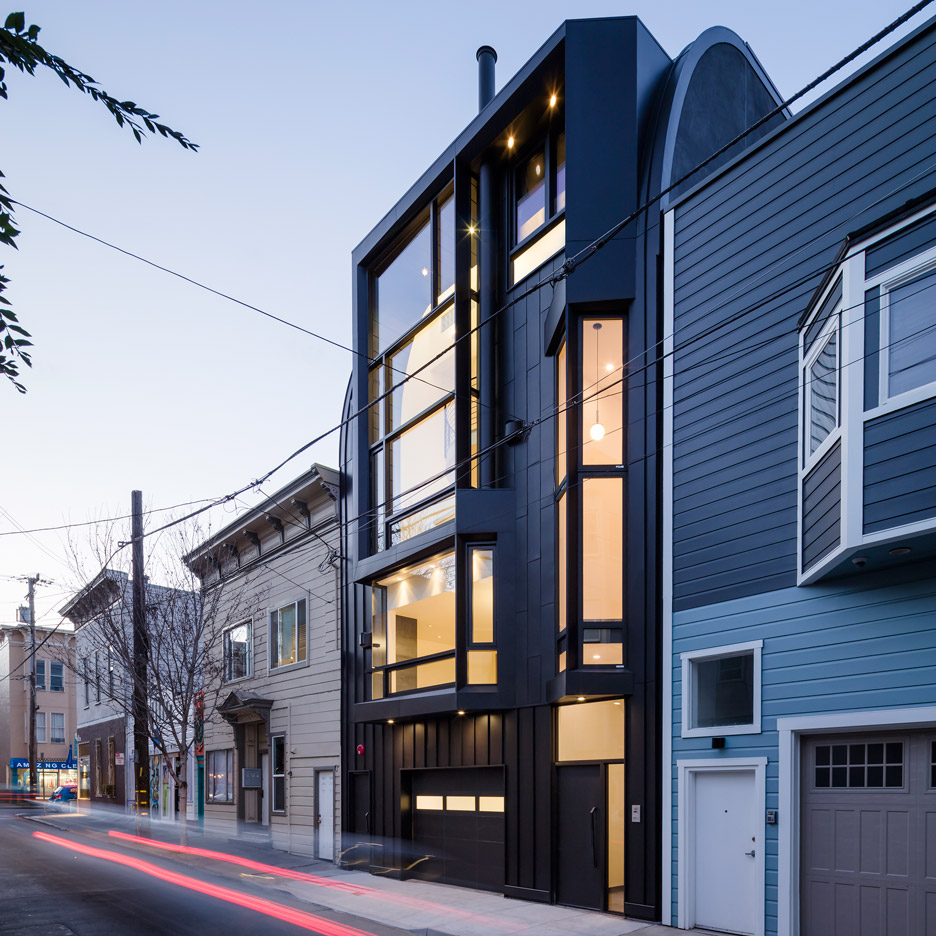