Canadian studio Measured Architecture has used a palette of cypress wood, board-formed concrete and metal to create a family home and "laneway house" for a narrow lot in Vancouver.

The Rough House is located in the city's Kitsilano neighbourhood. Encompassing 3,600 square feet (334 square metres), the residence consists of the main home and a laneway house – a small, detached dwelling that occupies the rear of a property and faces an alley.

The two homes sit on opposite sides of an elevated deck.

The rectilinear buildings were kept narrow in order to make room for side yards and light wells.

"Fundamental to the success of this project is the separation of the home from its neighbours in a tight urban condition, through the narrowing of building to support increased side-yard landscape edges and exterior light-well circulation,” said Measured Architecture, a studio based in Vancouver.

The main dwelling consists of a single-storey box adjoined to a two-storey volume. A pathway made of hexagonal stone pavers leads to the north-facing front door.

The team aimed to create a "play of textures to increase an intimacy between materials and occupant".

The larger volume is clad in carbonised cypress, while the smaller volume has exterior walls made of board-formed concrete.

The boards used to form the concrete were white-washed and then repurposed as cladding for soffits and window surrounds.

The materials "address the need for compositional balance, not only at the building massing level but also at the scale of fine, medium and coarse material selection", the studio explained.

Inside the primary dwelling, the team created a central stair with walls made of hot-rolled steel. Beyond providing access to the home's three floors, the staircase is meant to serve as a dividing element.

"The stair running through the house on all levels operates as a dividing dorsal, separating the east two-storey massing from the single storey on the west," the firm said.

The architects placed the master suite, a guest bedroom and a wine cellar in the basement. A light well that runs the full length of the building brings natural light into the subterranean spaces.

On the first floor, the smaller volume houses an office, powder room and boot room. The larger volume contains a family room and an open-plan kitchen, dining area and living room.

Ample glazing provides a strong connection to the outdoors.

The upper storey houses two bedrooms and a children's play room, which opens onto a green roof.

The rear of the main dwelling has a large glass wall that opens fully to the outdoors. It also looks toward the backside of the laneway house, which features a lush, green wall.

The front of the laneway home faces an alley and is wrapped with metal panels. The small building is also topped with a green roof.

Other homes in Vancouver include a waterfront dwelling by Mcleod Bovell Modern Houses that hugs a rocky hillside and the renovation of a century-old dwelling with a tall pointy roof by Darcy Jones Architecture. 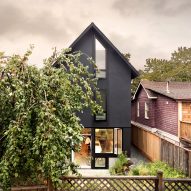