As Apple gears up to open its Foster + Partners-designed campus in Cupertino, a drone has filmed the buildings nearing completion, and reports have emerged that the company is buying up all the trees available in California.

The tech company's employees are due to start moving into their new offices this month, and high-definition drone footage by Youtube user Matthew Roberts shows that structures across the site, now called Apple Park, are almost ready.

Apple is also populating the 175-acre (71-hectare) stretch of the Santa Clara Valley with native trees, sourced from nurseries all the way up the Pacific coast.

According to the San Francisco Chronicle, there is hot competition for the foliage. The team working on the garden roof for the city's Transbay Transit Center are also trying to snap up available species, but finding that Apple has already taken the majority.

The trees at the Apple Park will populate the landscape designed by Philadelphia studio OLIN, which will include two miles of walking and running paths for employees.

The designated green space surrounds a variety of buildings by UK firm Foster + Partners, which are all at various stages of completion.

Along with the giant ring-shaped structure that has become synonymous with the project, the drone footage captured at the end of March reveals huge parking garages with roofs covered with solar panels.

It also shows the top of a 1,000-seat auditorium that will open later this year and be named after the company's late founder Steve Jobs, who originally asked Foster to design the complex in 2009.

Other amenities across the site will include a visitors centre with an Apple Store and public cafe, a 100,000-square-foot (9,290-square-metre) fitness centre for Apple employees, as well as secure research and development facilities.

Drone cameras have been documenting the construction of the vast project since it began in 2014. The most recent video we published was in September 2016.

Apple says it will take six months to move more than 12,000 people into the new headquarters.

The company was also recently added to the list of those permitted to test self-driving cars on California's roads. 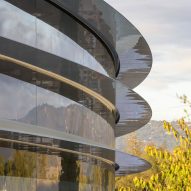