British architect David Chipperfield has stepped down from his position as artistic director at Italian furniture brand Driade, and has been replaced by a "creative committee".

Chipperfield's high-profile appointment to the role was made in late 2014, shortly after Driade was rescued from bankruptcy by a €7 million (£6 million) injection from private finance company Italian Creation Group.

Driade told Dezeen this week that Chipperfield's involvement ended in 2016, and that his artistic leadership had been passed "seamlessly" to a creative committee.

"The two-year collaboration from 2014 to 2016 between David Chipperfield and Driade, first established immediately after the acquisition of the company by Italian Creation Group in 2013, saw David Chipperfield appointed as artistic director, and aimed to redefine and realign the company values that led to Driade's unique position in the history of design," the company said in a statement.

"Driade has established a creative committee, composed of leading figures from the design world, that will guide the definition of the next stage in the development of the company in line with the strategy initiated by David Chipperfield. This has enabled artistic direction to be passed seamlessly to the new creative committee in time for the 2017 Salone del Mobile." 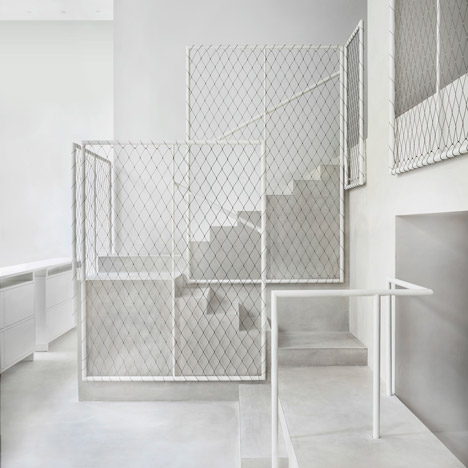 Driade was founded in 1968 by Enrico Astori and was for a long time one of the most glamorous and adventurous of Italy's design-led brands. It counts collaborations with Philippe Starck, Fabio Novembre and Ron Arad among its furniture, lighting and homeware.

Fortunes changed in 2012, when the brand almost went under with debts of €1.7 million (£1.4 million). Italian Creation Group, headed by businessmen John Perissinotto and Stefano Core, stepped in to save Driade in June 2013 – taking 80 per cent of the firm's equity, according to business news site Milano Finanza.

Chipperfield's appointment in 2014 marked the brand's relaunch under its new ownership. The architect  – who is known for his minimalist style – went on to overhaul Driade's Milan showroom in 2015.

At the time of the appointment, Driade said that the architect would work with Core and the Astori family to "oversee the careful merging together of past and future", while Core said he hoped the clash of styles between Chipperfield and Driade would yield "amazing" results.

"The confrontation between Driade's eclecticism and David's innovative minimalism will certainly give birth to amazing projects," Core said.

At this year's Salone del Mobile, Driade showed it was continuing to take risks by introducing Torquemada, a new furniture collection by Starck that references historic torture devices.

David Chipperfield placed at number 10 in the inaugural Dezeen Hot List, an index of the 400 movers and shakers the Dezeen audience most wanted to read about.

High-profile past projects by the architect include the refurbishment of the Neues Museum in Germany and the Hepworth Gallery in the UK.