News: Italian furniture brand Driade has appointed British architect David Chipperfield as its artistic director, a year after it was rescued from financial collapse.

Chipperfield's appointment coincides with the announcement of a new flagship Driade showroom this week in Milan's Via Borgogna, which will be designed by the British architect. Driade said the store would be "not just a shop but a sort of art gallery".

The idiosyncratic brand was rescued from bankruptcy with a €7 million injection by private finance company Italian Creation Group last summer.

Chipperfield, whose minimalist style contrasts with Draide's quirky back catalogue, will now take responsibility for all of the brand's "creative processes", under the leadership of Stefano Core, the head of Italian Creation Group and Driade's new CEO. 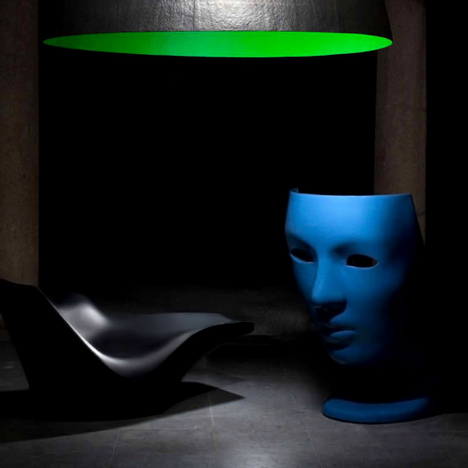 Driade to relaunch after financial rescue

"As artistic director, David Chipperfield will deal with all the creative processes and he will be responsible for conceiving, developing and implementing the Driade vision and focus, and for major decisions about the continuing development of the brand's values and activities," said a statement from Driade.

The furniture, lighting and homewares company founded in 1968 by Enrico Astori has previously worked with designers including Philippe Starck, Fabio Novembre and Ross Lovegrove.

It developed a reputation for being one of Italy's most glamorous design companies, but almost went under in 2012 with debts of €1.7 million.

Italian Creation Group, headed by businessmen John Perissinotto and Stefano Core, stepped in to save Driade in June 2013 – taking 80 per cent of the firm's equity, according to Milano Finanza. Astori was named honorary president, and his daughter, Elisa Astori, was made creative director.

The announcement of Chipperfield's appointment marks the brand's relaunch under its new ownership.

Driade said that the architect would work with Core and the Astori family to "oversee the careful merging together of past and future."

"The confrontation between Driade's eclecticism and David's innovative minimalism will certainly give birth to amazing projects", said Core.

Chipperfield's most high profile projects include the refurbishment of the Neues Museum in Germany and the Hepworth Gallery in the UK. He curated the Venice Architecture Biennale in 2012, and his firm has recently completed a number of luxury fashion boutiques.

Dezeen Book of Interviews: David Chipperfield features in our new book, which is on sale now

But the 2013 Praemium Imperiale winner has also worked with a number of design brands, including Italian company Alessi, for whom he produced a folding chair and a range of tableware among other products.

Earlier this year, Alessi's founder warned that Italy's design manufacturing capability is at risk of disappearing.

Alberto Alessi said that Italian design had traditionally been characterised by Italian designers working for Italian manufacturers, but this had changed in the 1980s. "Design expressed through the catalogue of Italian design factories was not any more Italian," he said. Now, with Italy's challenging economic climate and increasing pressure from foreign competition, Alessi warned that "maybe the second element, Italian production, will disappear."

Driade is not the only well-known Italian brand to have undergone a change of leadership recently. In February, US office furniture giant Haworth acquired a majority stake in brands including Cappellini, Cassina and Alias as part of a $270 million deal with Italian furniture group Poltrona Frau. And in September, Dezeen revealed that Italian lighting brand Flos was to be sold to a private equity fund for around €400 million.