For his Milan design week exhibition, Norwegian designer Sigve Knutson presented a series of textured objects inspired by the lines he uses in his drawings.

The Drawing Objects collection, on show in the 5Vie district, featured a number of pieces each made from different materials, including clay, aluminium, silicone and ceramic.

While the function of some pieces was obvious, such as the stools and a table, others were intended as more sculptural pieces.

For the exhibition, Knutson – who graduated from Design Academy Eindhoven last year – displayed each piece next to the drawing that informed it.

"The drawings that you see on the wall are connected to the objects," he told Dezeen at the exhibition preview. "I'm trying to connect drawing to crafts, so trying to find these immediate ways of working with materials."

"You see the marks of the sculpting as a strong reference to the drawing and how the marks become the objects."

For the aluminium pieces, Sigve first sculpted a form from a foam material, before taking it to a foundry near his Eindhoven studio. Here, molten aluminium was poured over the design – replacing the foam and leaving behind a solid structure that he then hammered to give texture.

This technique was also on show at the Dutch Invertuals exhibition in the Isola district, where the designer presented a series of objects made from hammered anodised aluminium, aiming to showcase both the strengths and weaknesses of the material and its potential uses.

"The potential of materials and objects produced nowadays could contribute to what we might desire from their future," he said.

Other pieces were made from air-drying clay, carved wood and ceramics – but each was textured with the same lumpy surface. 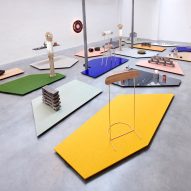 Designers meet the challenges of the future at Dutch Invertuals exhibition

Drawing Objects was organised and curated by Carwan Gallery in Beirut. It was on show as part of Milan design week, which took place this year from 4 to 9 April, and some pieces were also exhibited at the Nomad fair in Monaco this week.

Other highlights from Milan design week included a marble-lined mausoleum, Marni's sandy playground filled with brightly coloured furniture and toys and an igloo made from refugee life jackets.