Brooklyn designer Fernando Mastrangelo has created a pair of contrasting furniture collections: one that features smooth curves and another with jagged edges.

Mastrangelo cast layers of pale granular materials to create the Ghost and Thaw collections, which he unveiled at this year's Collective Design fair in New York.

Both based on different natural forms – rocky glaciers influenced the jagged edged Thaw, while fallen snow inspired the softly curved Ghost – which he achieved using different moulds and materials.

The large and heavy Ghost collection includes a dining table, coffee table and console is made entirely of cement with a silky finish.

"The cement, we worked it to the point where it was beautifully soft," he said. "They're like butter."

He digitally modelled the collection and used a computer numerically controlled (CNC) router, which employs a robotic machine with an arm, to create foam models.

These models are then used to create fibre-glass moulds for casting the cement.

"It starts as a massive block of foam and its CNC milled, the machine sort of spins it and cuts it," Mastrangelo said. "Then we takes those back to the studio, and make these huge moulds out of fibreglass."

The moulds are mounted on their sides against a wall and the liquid cement is poured in and left to set – a technique that creates the striations that pattern the surfaces.

To create the Thaw pieces, powdered glass and cement is poured into an MDF box to set. The designer hand sculpts the material before it is left to set.

The collection features a console with a gaping hole in the centre, a shard-shaped coffee table, a pair of sconces and a mirror covered with sloping layers.

Mastrangelo recently held a solo show in New York's Greenwich Village, where he showcased furniture that evoked landscapes through coloured gradients. He is also currently debuting another series at the Sight Unseen Offsite exhibition in the city, which takes place until 22 May 2017.

This year's Collective Design fair in New York ran from 3 to 7 May 2017 at Skylight Clarkson Square, 550 Washington Street, New York. It took place as part of the citywide NYCxDesign festival, which continues until 23 June 2017. 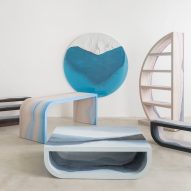