Irish studio Heneghan Peng has completed a museum dedicated to Palestinian culture in the city of Birzeit, featuring a faceted stone exterior and terraced landscaping that references the region's rural landscape.

The Palestinian Museum is located on a hilltop site that overlooks the Mediterranean Sea to the west. The site was offered to the museum on a long-term lease by the adjacent Birzeit University.

The design project was awarded to Dublin-based Heneghan Peng following an international competition in 2011. The studio's proposal seeks to integrate the museum into its context and to reference the traditional terraced landscapes of the West Bank.

"Every element of the landscape of Palestine tells a story of intervention, production, culture, environment and commerce," said the architects. "Embedded in its terraces is this rich and very particular history."

"The approach to the Palestinian Museum design was to draw on this history, placing the museum building into its immediate site, yet drawing from this site to tell a larger story of a highly diverse culture."

The museum's masterplan comprises a series of stone-walled terraces that follow the site's sloping topography and can be adapted at a later date if circumstances change.

The planting of the cascading terraces reflects the museum's position as a cultural facility situated within an agricultural setting.

The terraces closest to the building are the most domesticated and become more closely related to the wild landscape as they descend to the west. Local trees and flowers are mixed with imported species to highlight the region's historical trade connections.

The terraced landscape around Birzeit also informed the museum building's form and the use of local limestone for its external cladding.

Viewed from down the slope, its angular facades appear as a continuation of the landscaping's slanted stone surfaces.

The limestone slabs extend from the amphitheatre across all of the building's facades and roofs, creating a monolithic and homogenous structure that appears to emerge from the hilltop.

Slanted openings containing windows are set behind rows of black fins that provide a degree of shade to spaces including a glazed gallery on the ground floor.

The museum launched without a permanent collection and instead currently relies on a programme of touring exhibitions while it gradually establishes its own collection.

Interactive exhibitions in a variety of formats are presented both at the main museum building in Birzeit and several satellite partner venues, while its extensive digital collections and online platforms are made available to individuals and institutions worldwide.

Heneghan Peng's work in the cultural sector includes a visitors' centre featuring stone mullions that imitate the basalt columns of the Giant's Causeway in Northern Ireland, and a competition-winning design for a wavy waterside museum topped with a grass roof in Ontario, Canada. 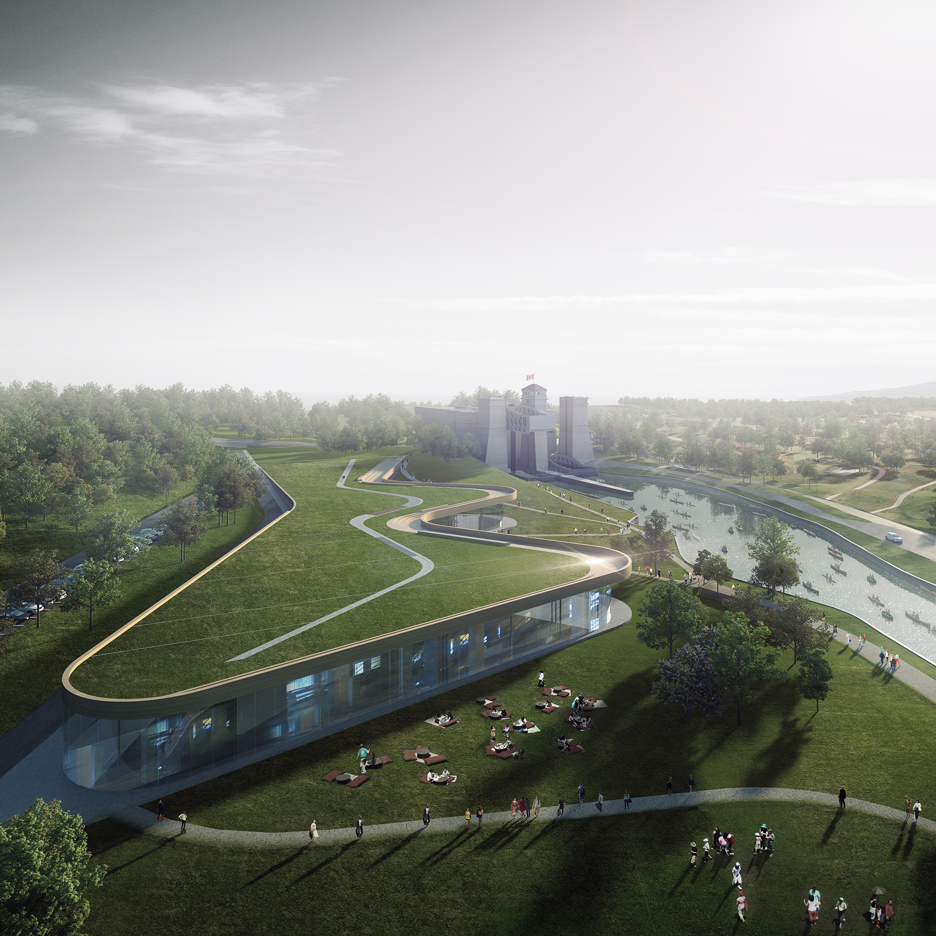