Designs by architects including Assemble ,  Lacaton & Vassal, Mecanoo and Sergison Bates are among the 24 case studies in the book, which was co-authored by the Karakusevic Carson Architects director and his colleague Abigail Batchelor.

They are also presented in an exhibition at the Royal Institute of British Architects headquarters in London, accompanied by a wide selection of scale models.

The aim was to shine a light on the latest generation of social housing architects, who are challenged with maintaining design quality while faced with new funding models and ever-increasing demand.

"This book is about raising awareness, championing great architecture, client-side process and providing meaningful case studies so that students and housing professionals of all kinds might think differently. It brings together outstanding schemes, delivered in challenging circumstances by thoughtful architects working in collaboration with communities," said Karakusevic.

The London-based architect – who has worked extensively in housing, and has one of his own projects in the book – hopes the research will provide a source of inspiration for other architects in the UK, where demand for social housing is high.

"This is an exciting time for public sector led housing across Europe," said Karakusevic. "There are great things being done by local authorities and community groups in the UK, and they are building with a confidence and a design ambition we haven't seen since the late 1970s."

"It is crucial we look at alternative forms of delivery to tackle our current crisis and ensure these support efforts elsewhere. At the same time it's important we continue to learn from the best in Europe," he added.

All 105 homes in this development built by Norwich City Council achieve Passivhaus sustainability standards, making it the largest project of its kind in the UK.

"Every dwelling has its own front door opening directly onto the street at ground level, with upper-floor flats accessed from dedicated hallways and staircases, allowing private and social tenures to be mixed across the site," said Karakusevic.

A 1961 tower block on the outskirts of Paris was renovated to create this innovative housing scheme (main image). The renovation included an extension, providing residents with more space through the addition of winter gardens.

"A prefabricated module was added in place of the existing facade and constructed without the need to move any residents," said Karakusevic. "Each home is provided with more internal space, adding joyous balconies or winter gardens and improving light into every home."

Two "envelope" buildings are arranged around courtyards to form this 72-unit development. Each home features a multi-use winter garden, which can be climate controlled using adjustable shutters and screens.

"As in a freestanding house, each apartment in the typical arrangement has four facades, three of which are exposed," explained Karakusevic.

"The apartments have the same qualities as a single-family home with a flexible external space that can be used in a variety of ways and be adapted to suit shifting requirements over time."

There are 765 homes in this upgraded Hackney estate, which was first built after the second world war. The architects added new buildings to complete courtyards and create a new landscaped street.

"At the crown of the building, double-height terraces are provided to the upper level social housing units; views from the dual and triple-aspect homes are framed by brick piers that extend to meet the structural line of the roof," said Karakusevic.

This reworking of an old estate on the outskirts of Tongeren provides 192 apartments and a community centre. The project makes use of "block form", which made it possible to create a variety of thresholds and communal spaces.

"The site has be reorganised in phases in order to introduce new civic space, communal gardens and a pedestrian street through the centre animated by regular front doors. By encouraging movement through and across the site the project is integrated with its wider context," stated Karakusevic.

"The terrace of family townhouses, has to handle the acoustic issues associated with the adjacent high-speed rail link running between Euston and the north-west," said the architect.

"It presents a continuous frontage to landscaped gardens and play spaces that are shared by all residents and in its form creates a strong streetscape recalling the familiar London vernacular."

Led by Woonbron Housing Association, this project reworked four of the 15 blocks that make up a post-war estate near Amsterdam. The project changes the use of ground-floor spaces, creates bigger living spaces and breaks up the scale.

"Originally 176 dwellings shared just two lifts and one entrance. In the revised scheme and refurbishment, the building is broken down into three smaller autonomously functioning segments, each with its own access system," said Karakusevic.

"Unnecessary cosmetic changes to the blocks are avoided in favour of meaningful, long-term alterations that adapt them to a contemporary and convenient way of living." 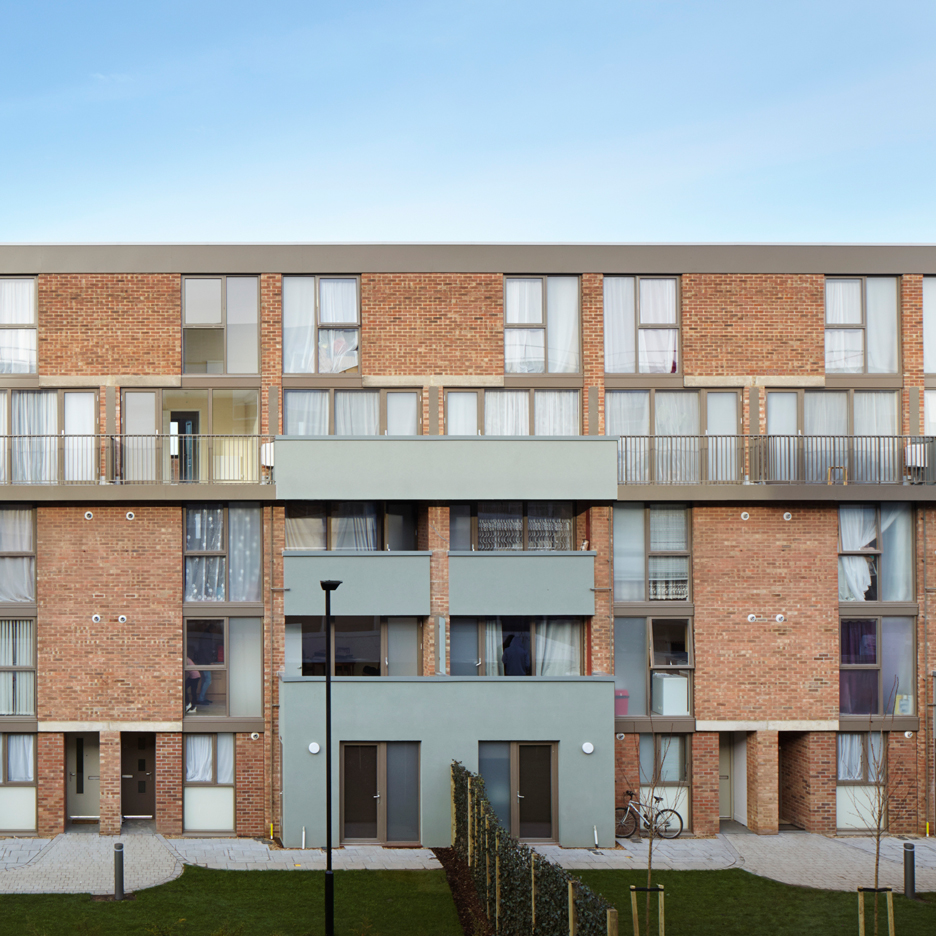