A tree grows up through a lightwell that Australian studio Welsh + Major has added to this house in Sydney, and topped with an opening glass roof.

Annandale House, a family residence named after its suburban location, occupies a long and narrow site, which measures five metres wide and steps across three levels.

The existing one-storey cottage is set at the highest level, on the street, while the two-storey extension by Welsh + Major creates an open-plan living space at basement level. Three bedrooms occupy the upper floor.

To bring in plenty of natural light to the lower floor, the architects separated the existing building and the extension with a lightwell.

It features a retractable glazed roof that allows the house to respond to the the city's mild winter and hot summers without the need to partition spaces.

"The lightwell gives the entire house space to breathe. In inclement weather, a retractable glazed roof can be deployed to enable all of the spaces to remain connected," the architects told Dezeen.

"Rather than separating rooms, the lightwell acts as a generous spatial ligature, connecting public and private zones in a way that is unexpected on a narrow urban site," they continued.

A tree planted in the gap and a concrete staircase featuring a block of green marble for its lower step form the centrepiece of this level.

Cement-block walls create continuity between the dining table placed in the nook underneath the existing house, and the living area in the extension.

The pale grey is offset by Tasmanian blackwood panelling and the black weatherboard-clad exterior of the old house, which now forms an internal wall.

A chunk of sandstone also protrudes into the space to reference the lower levels of the site.

"Remnant sandstone is left exposed as a reminder of where you are in relation to the ground plane, as the dining room slips in underneath the existing cottage," they explained.

A further two volumes make up the rest of the extension, decreasing in width and size along the southern side of the site to create a secluded courtyard on the other side.

"We established three new masonry volumes which slide down the southern side of the site, each one made thinner than the next like the tubes of a telescope," said the architects, "enabling the site to be opened up along the northern side to maximise valuable open space."

It adds a narrow kitchen, with a long line of sliding glass doors and smoked-oak cabinets. The third, even thinner volume is occupied by a small hallway.

The architects chose local Sydney sandstock brick to build the walls of the extension, which they also combined with the remnant brick and concrete from a demolished extension to suggest a style characteristic to the local area.

"Our interest is in exploring what an 'endemic' or local house might look like if we deliberately limited ourselves to using a local materials where possible," they explained.

Green roofs top all three of the new volumes and feature water tanks to collect and store rainwater for irrigation, toilets and laundry.

Welsh + Major was founded by in Sydney in 2004 by partners David Welsh and Christine Major.

Other projects by the studio include an angular concrete hideaway hidden amongst the trees in the garden of a late-Victorian house and the conversion of a 19th-century police station into a restaurant. 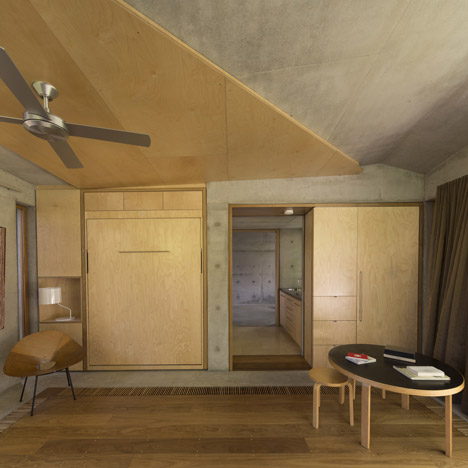 Concrete den by Welsh + Major nestles in a Sydney garden

Photography is by Michael Nicholson.